Photos from the secret weeks with Iver

Haha, that doesn’t sound like clickbait at all does it!? But yeah, I did actually keep Iver a secret for many weeks. Because I can be considered an extremely careful horse buyer, we ran two vet exams on Iver just to be 100% sure. On the other horses I had looked at we had ten(!) vets and consulting vets involved so two vet exams is not a lot in my crazy world of “I don’t want to buy myself more vet bills”. And I won’t mention the farriers, chiropractors, massage therapists and breed experts that was involved too … Jesus H Roosevelt Christ, I’m nuts.

Because it had been snowing a lot, we did one at his stable outdoors and one in a clinic in Oslo with more facilities two weeks later as a follow-up.

Because Iver needed to be trained before vet exam number two, we agreed that I would train him for a few weeks to get a chance to get to know him a little and keep him active.

I picked him up all by myself and the driving conditions were horrible. Freezing temperatures and rain made the roads icy and the police asked people to stay away from the roads. I had to stop at a petrol station and wait for a while before I could continue. Thankfully, everything went well and he stood like a hero in the trailer all the way home.

We even gave him a code name at the stable because I did not have any rumors spreading. He was named BB-8 for three weeks, hahah!

I had my heart broken twice last year in the search for my next horse, and I wanted to be 100% sure before I told anyone this time. I even hid it from my mom, haha. His owner received daily updates and pictures and Iver and I became good friends.

Iver lived in his own part of the turnout the weeks before I signed the papers, and got to meet both Batman and the rest of the horses. I knew it was a bit risky to bring him home and to spend time with him feeling-wise, but to be honest, I had been through that horrible sort of disappointment two times already, and had learned to shut the feelings out. If it happened a third time it would at least be some sort of ironic!

I fell for two horses in the search for Batman’s new friend, and last minute and after several health checks we discovered severe skeleton injuries and/or diseases in both horses. These two horses will always have a special place in my heart, I spent weeks and months on organizing transport ++ for these horses and as the vets cleared them both, I had already celebrated, both times. But it was too early. It was the worst decision I had to make, to say good bye to all the hopes and dreams I had in my mind for a long time, but it was the right thing to do. The most painful part was to inform the owners about what my vet-team had found. Nobody expects a young, untouched horse to have that sort of problems!

I already have a horse with joint issues at a young age; I could simply not spend a fortune on a horse that might never grow up.

I’m therefore very happy I finally found the perfect horse at last, with both perfect x-rays, an excellent upbringing and a loving personality. Patience is the key!

Here’s some photos of our first weeks together!

In the trailer, on our way home: 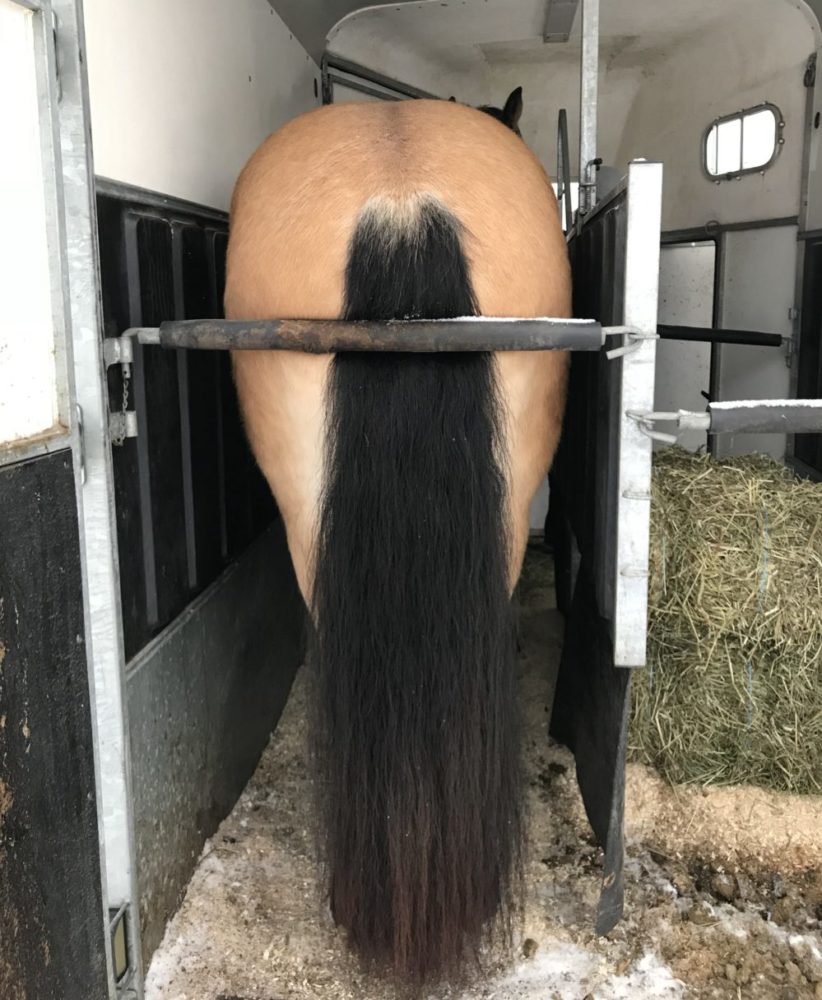 Arrival at our barn. 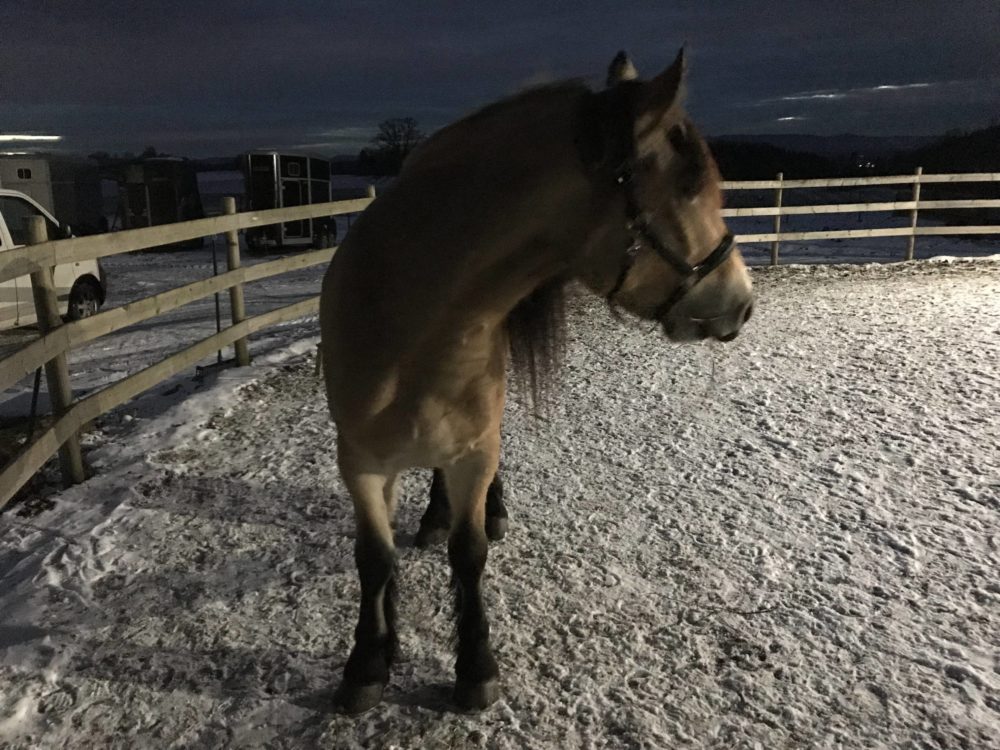 The first morning, he settled down very fast. 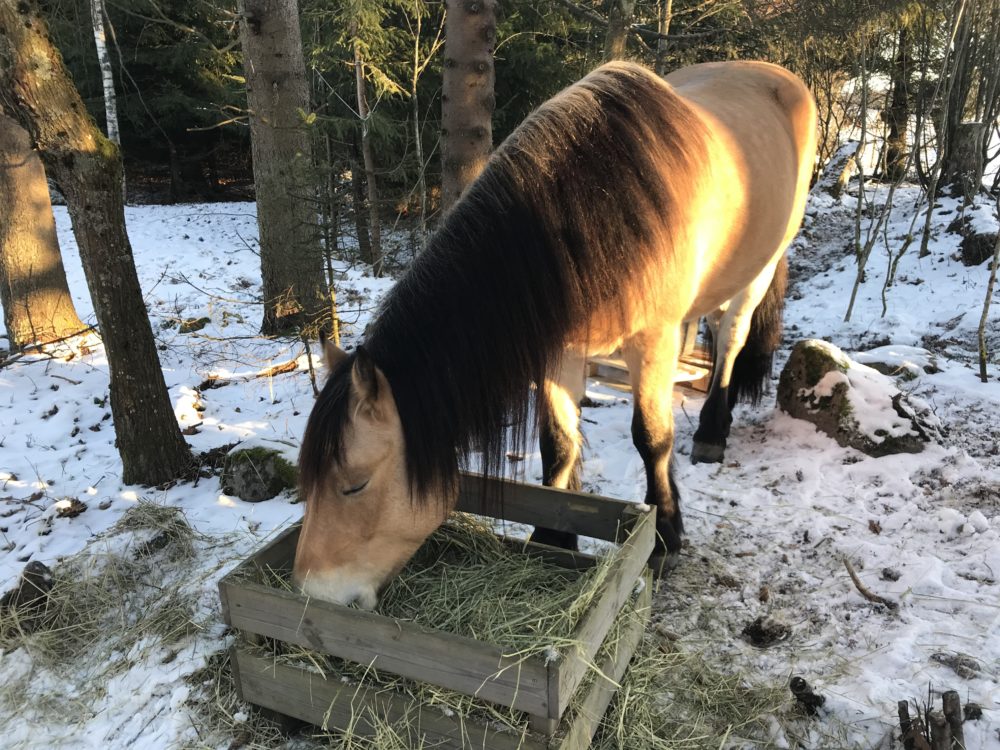 Meeting Batman for the first time with no fence between them. Batman immediately showed him who’s the boss haha! 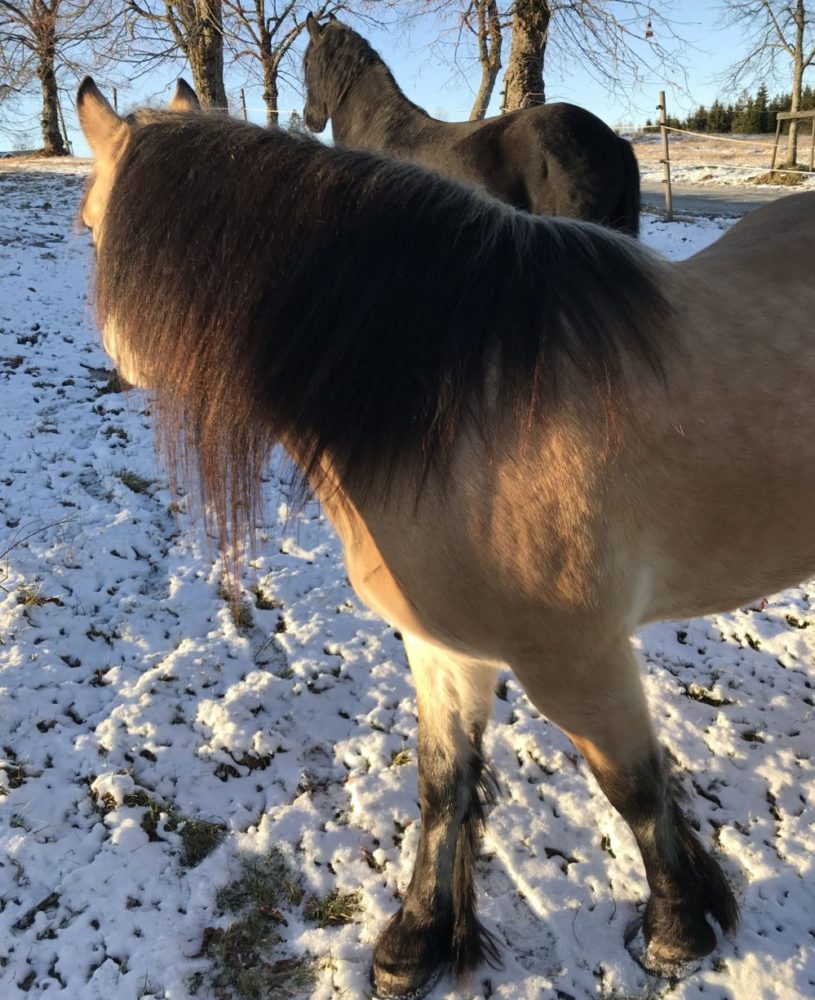 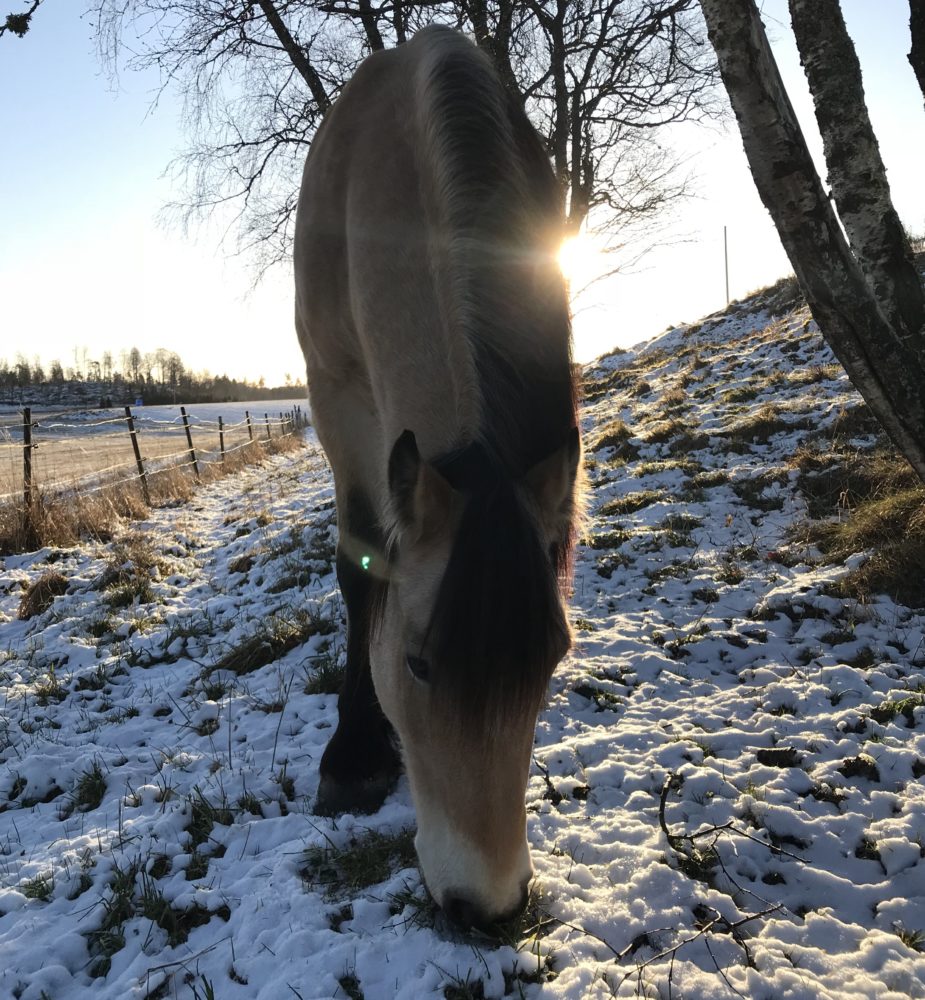 First hack around the barn. He did great! Because we was going to do a pre purchase lameness examination, he needed to be ridden on hacks three times per week. 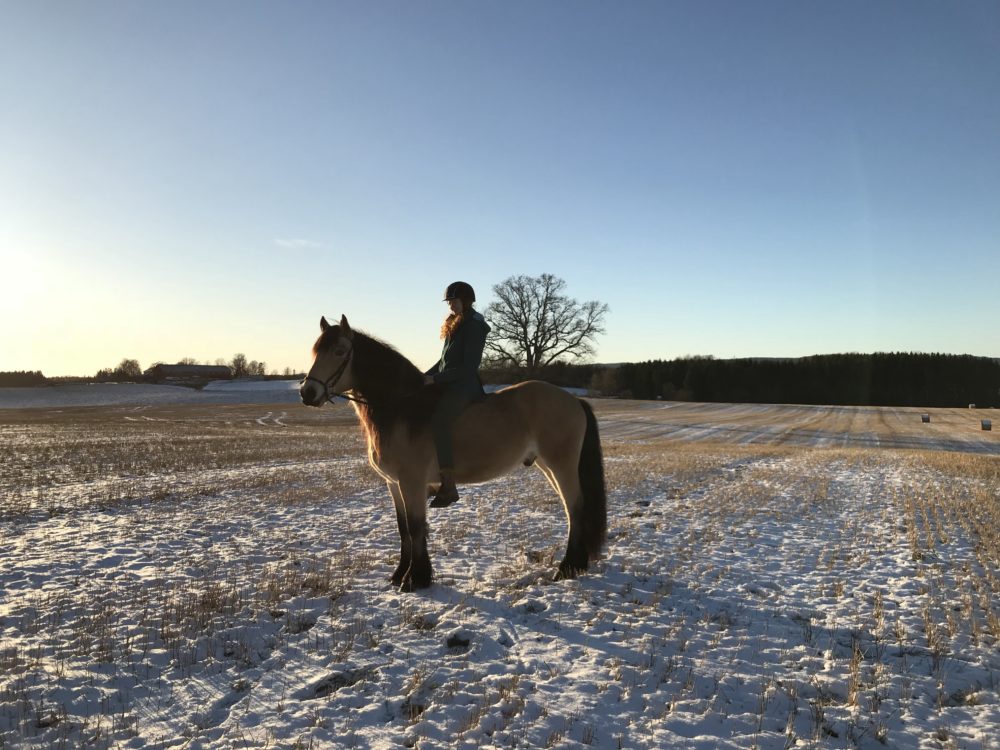 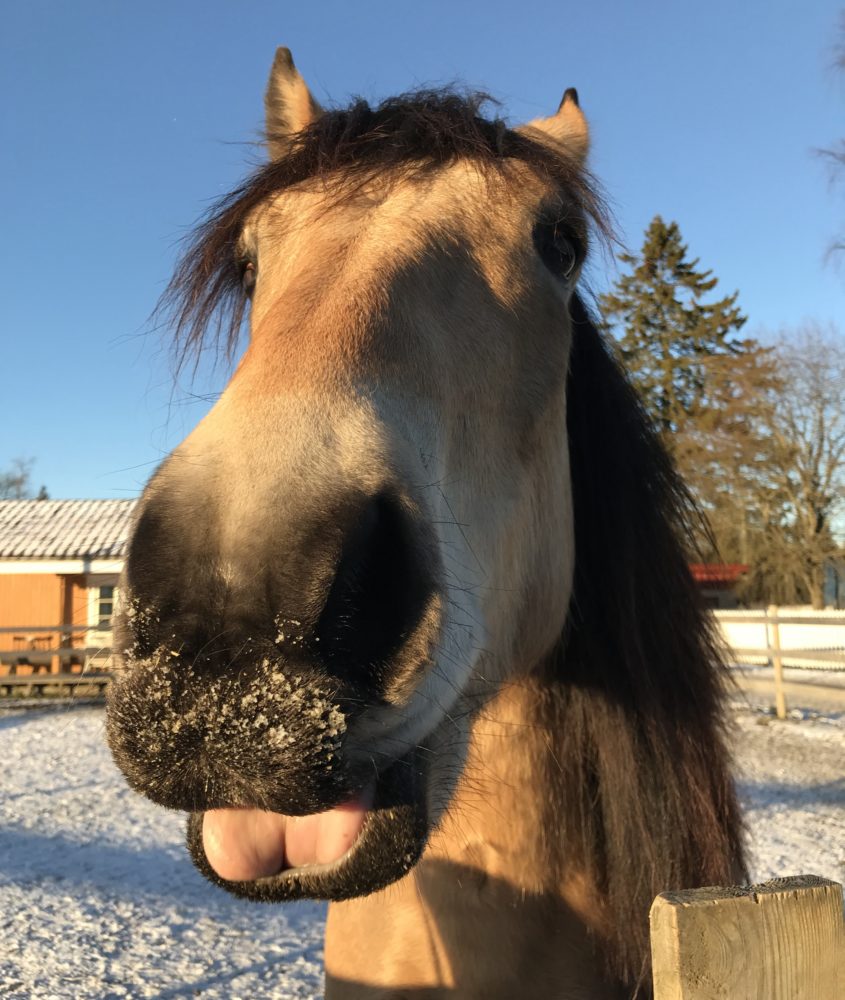 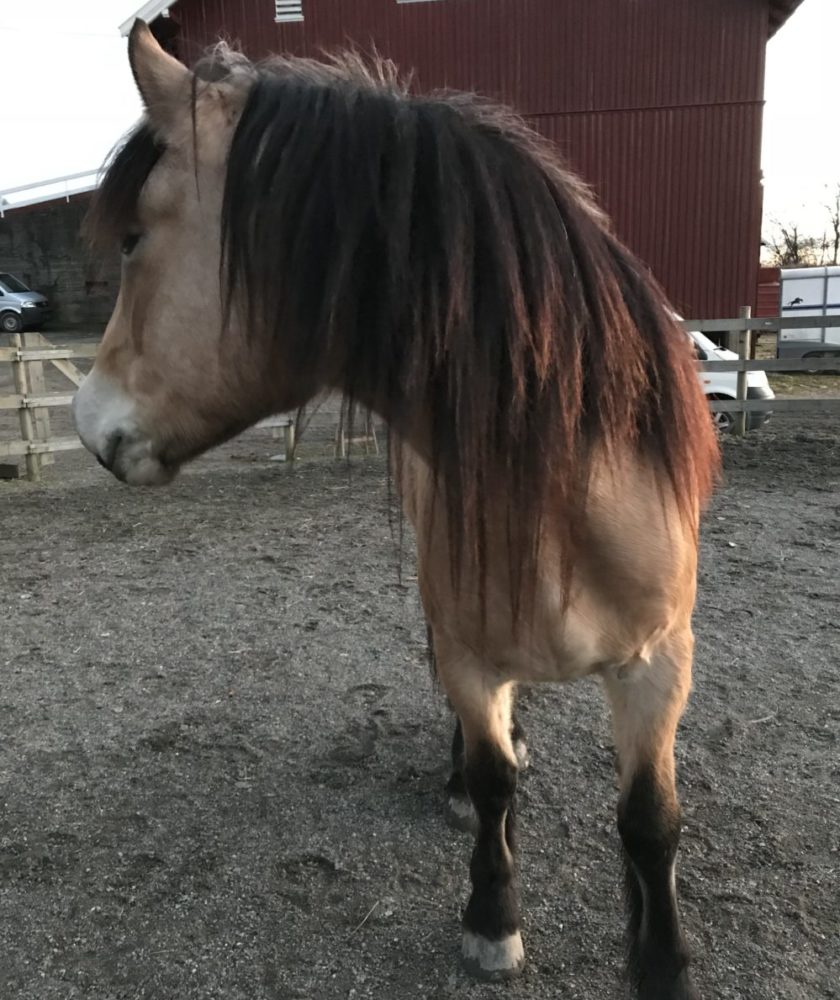 And he helped me out with the daily chores … 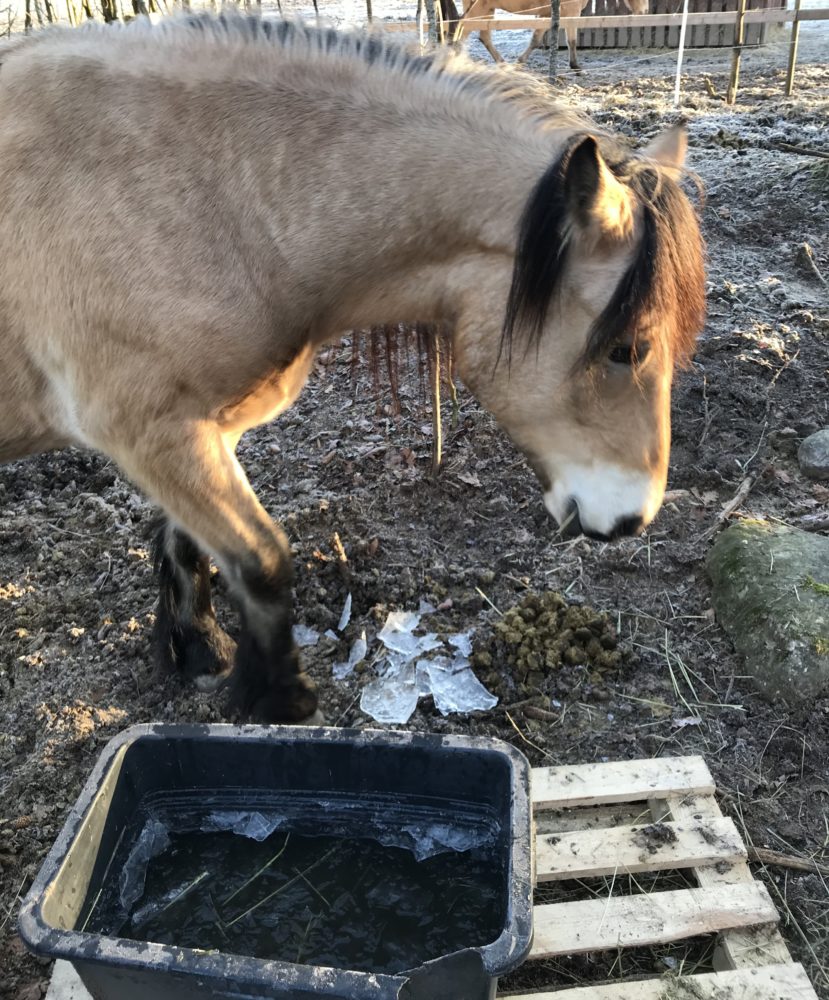 The best hack we had, we cantered for the first time that day and I actually cried. I cried because I had agreed to purchase a horse after seeing him for only two hours based on nothing but the gut feeling and when I asked him for canter, all I did was to think canter. And then we flew. Everything felt right and when I asked him to go back to walk, all I did was to think “walk”. It was like riding Batman. 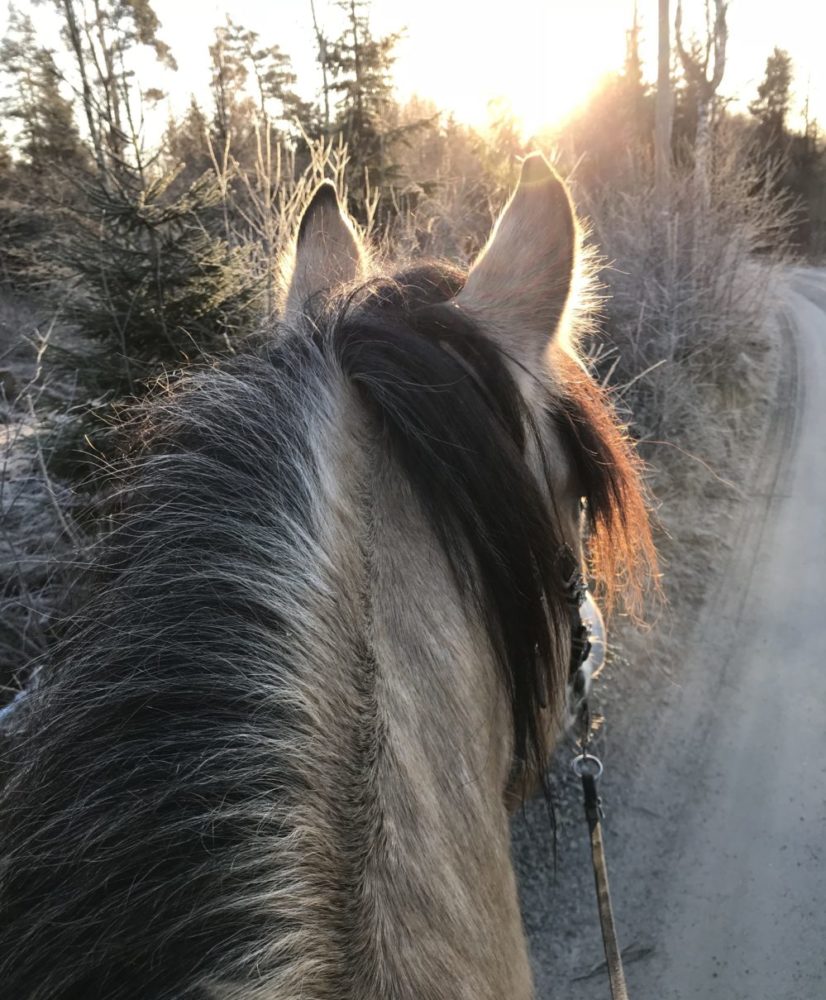 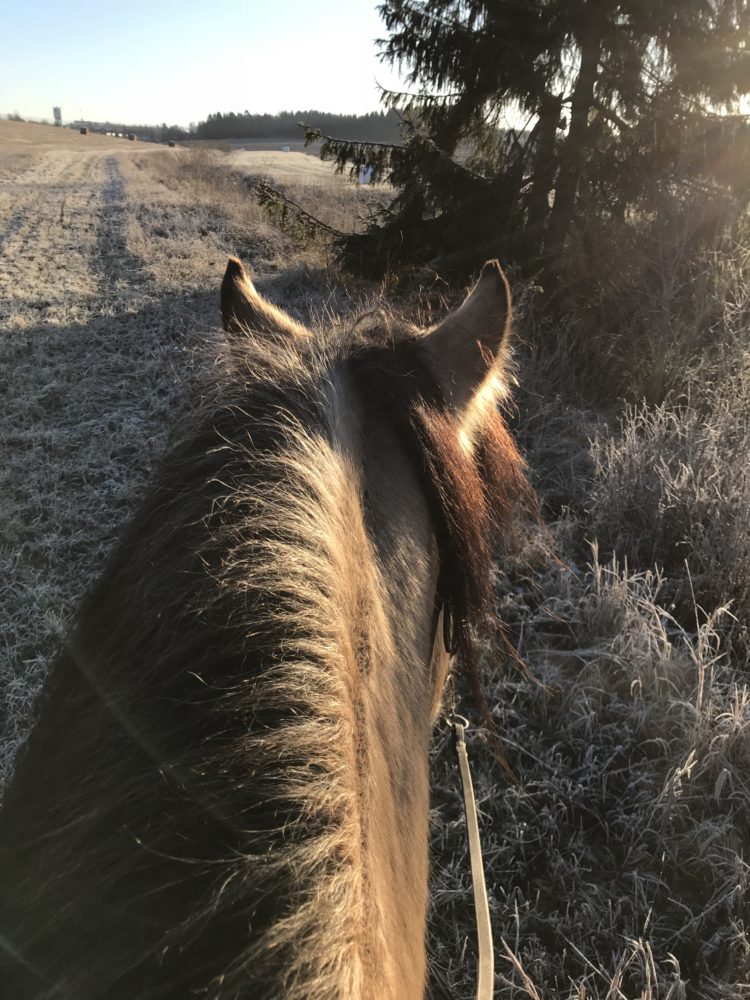 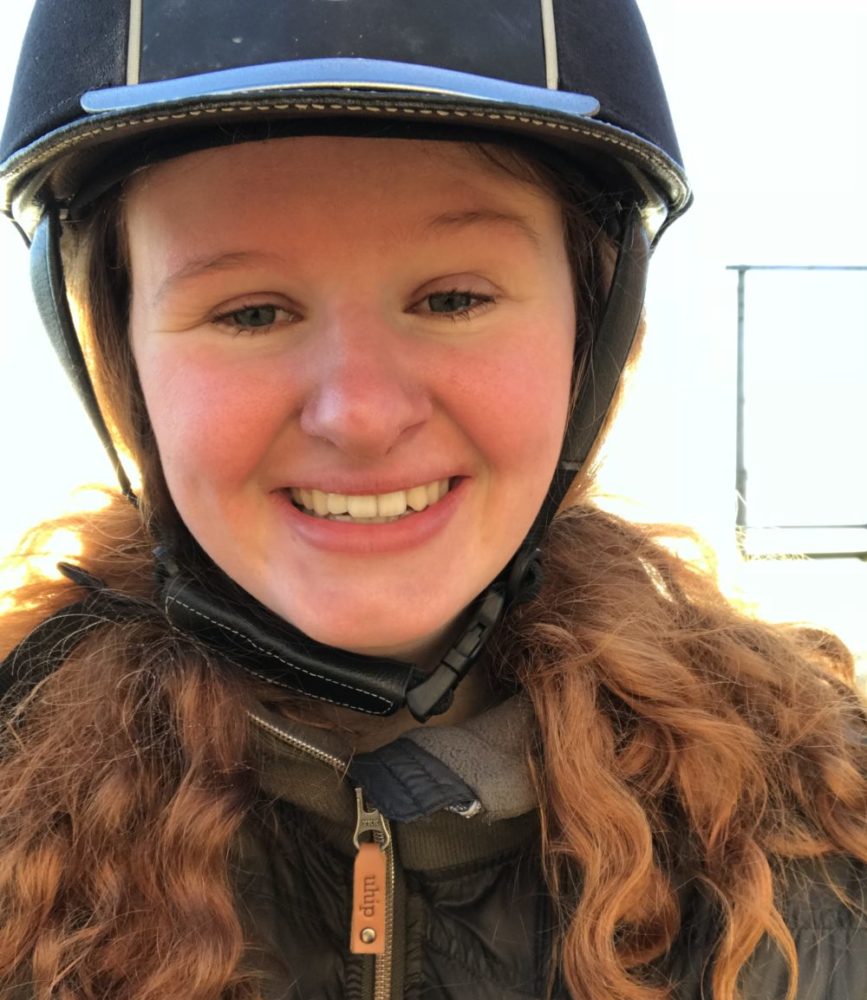 Then the big day came .. The last vet examination. Iver behaved like a gentleman at the clinic. We lunged him outside and ran back and fourth maaany times. I was super nervous … 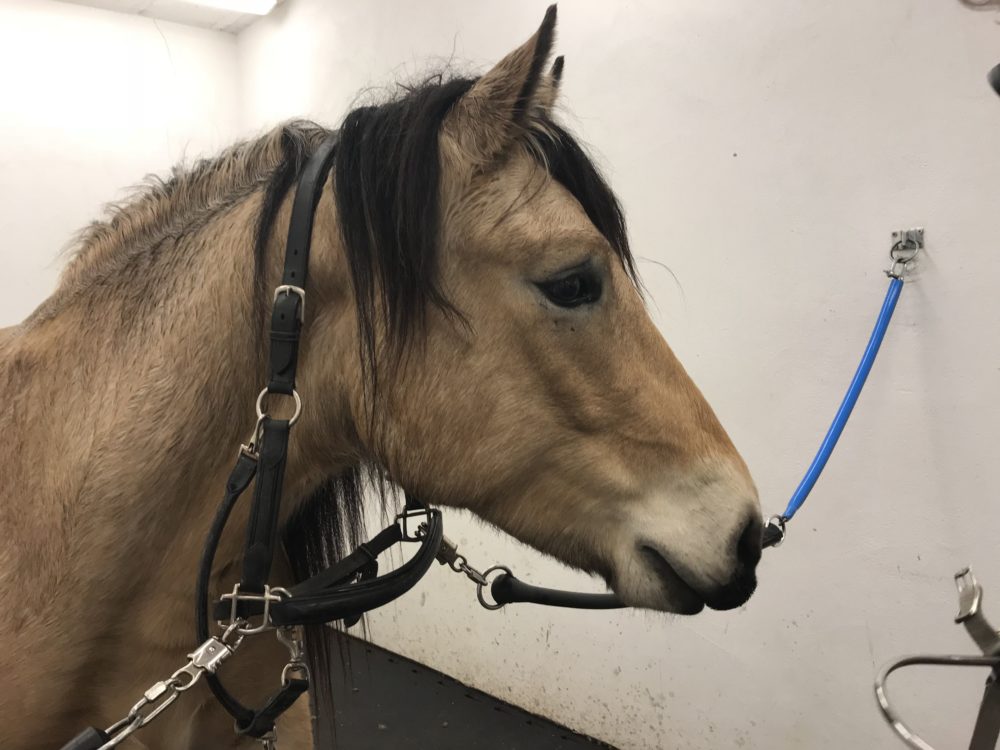 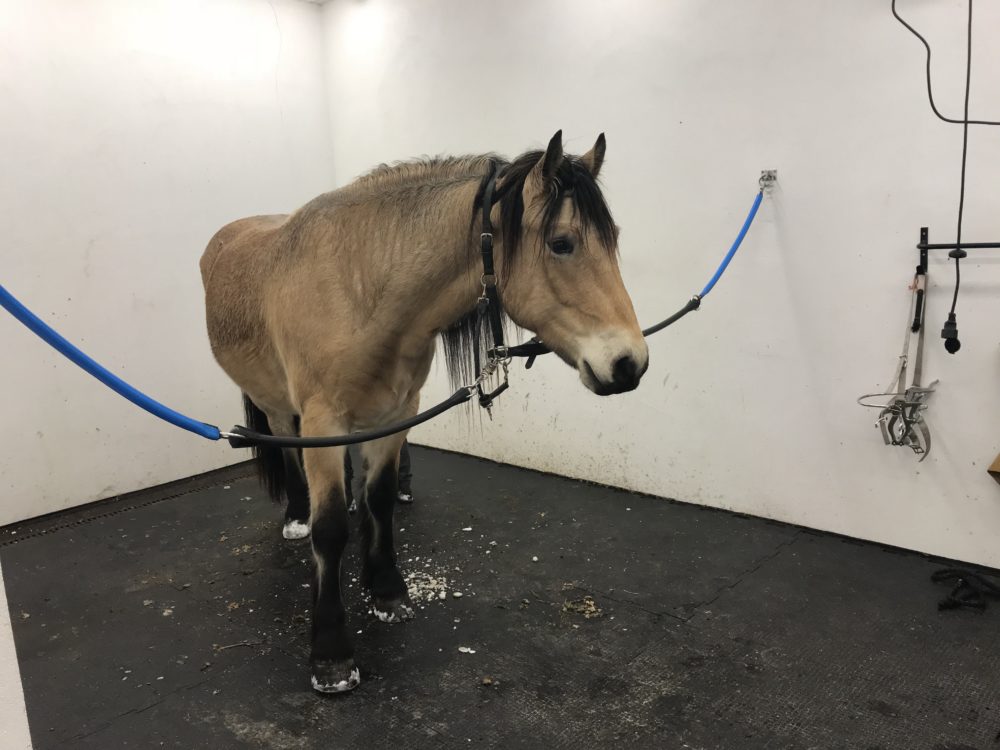 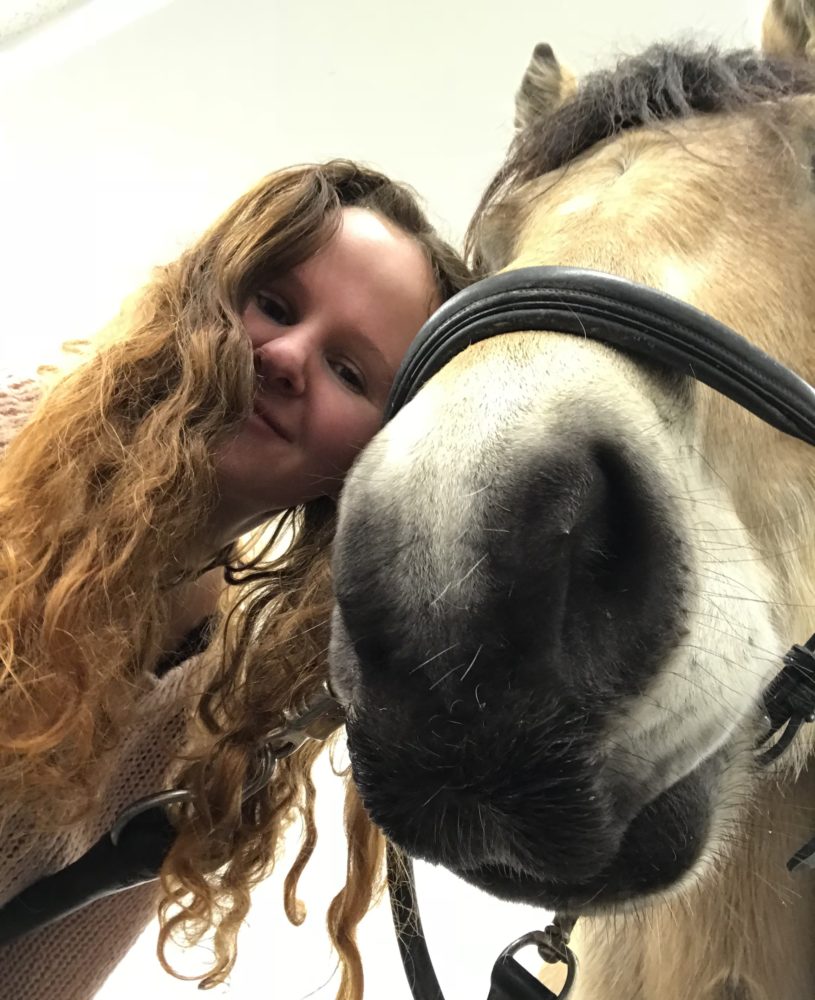 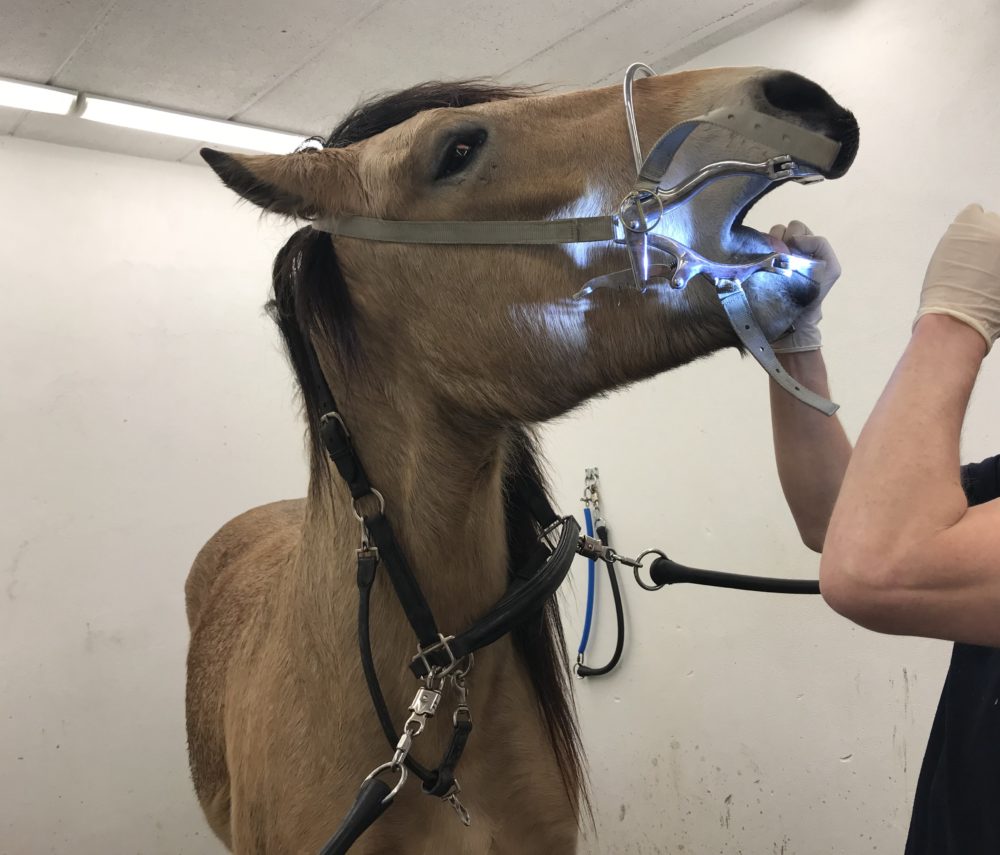 But they did not find anything unusal with his movements and his mouth looked fine too! I was SUPER HAPPY! I called the owner right afterwards, and the day after, he was mine. 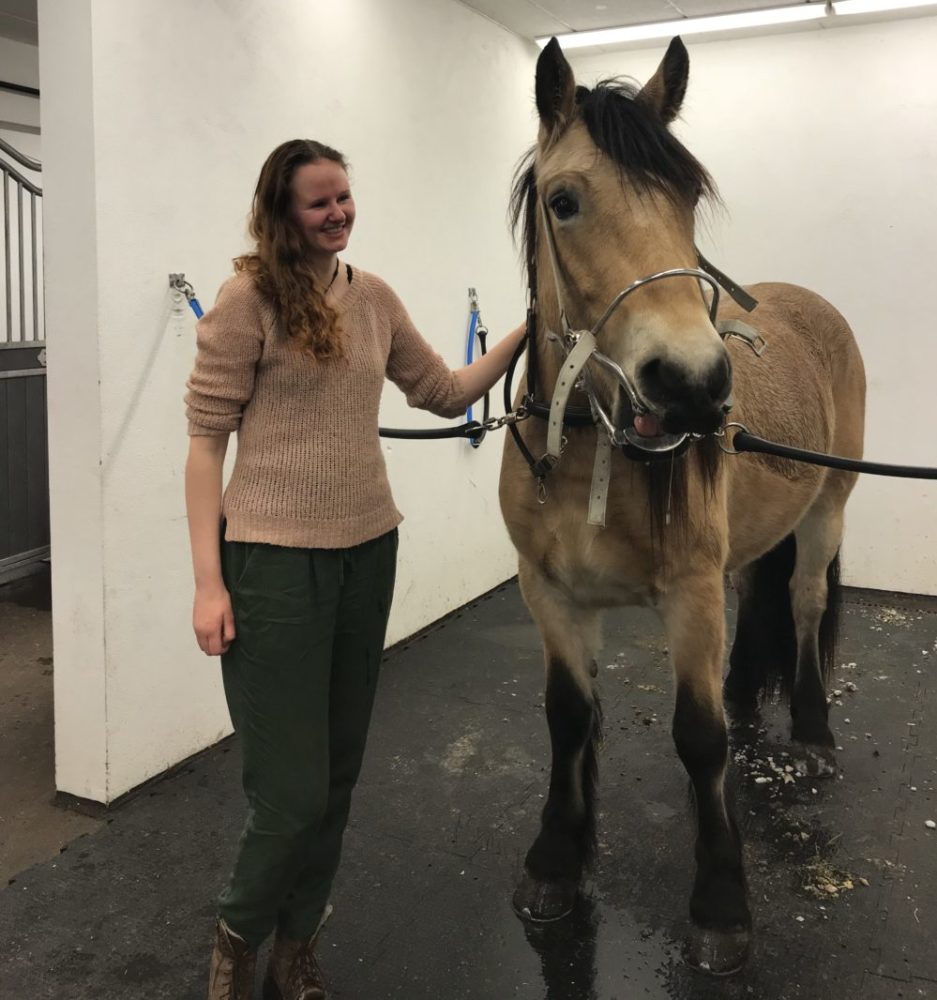 The first thing I did was to remove his shoes and let him live with Batman for a few days before he was let into the big herd. 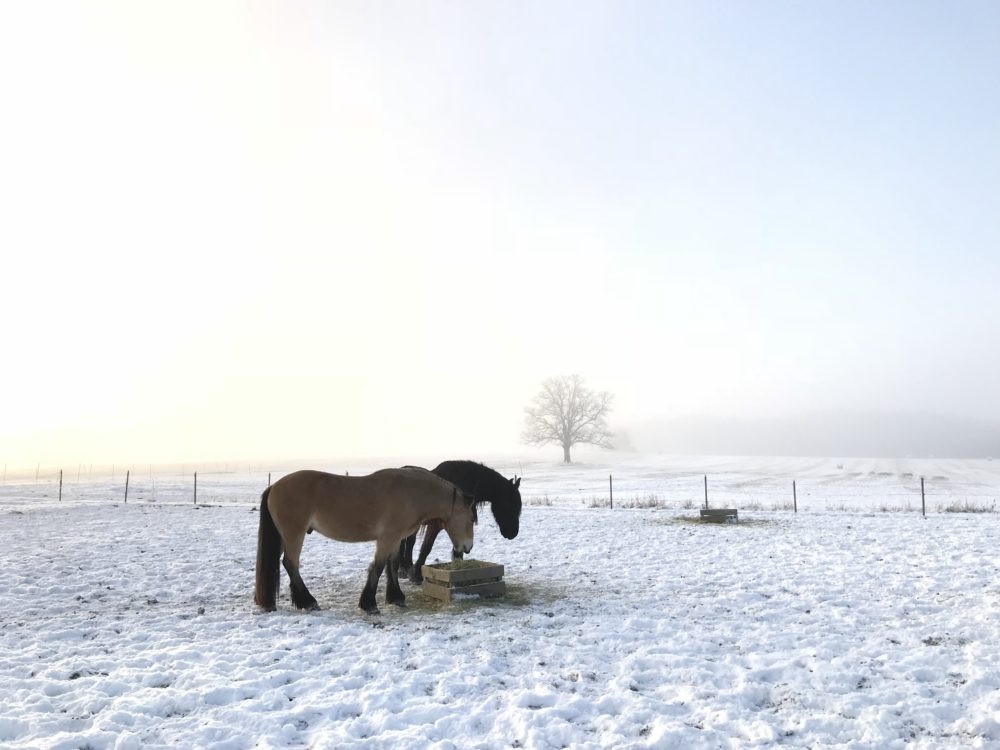 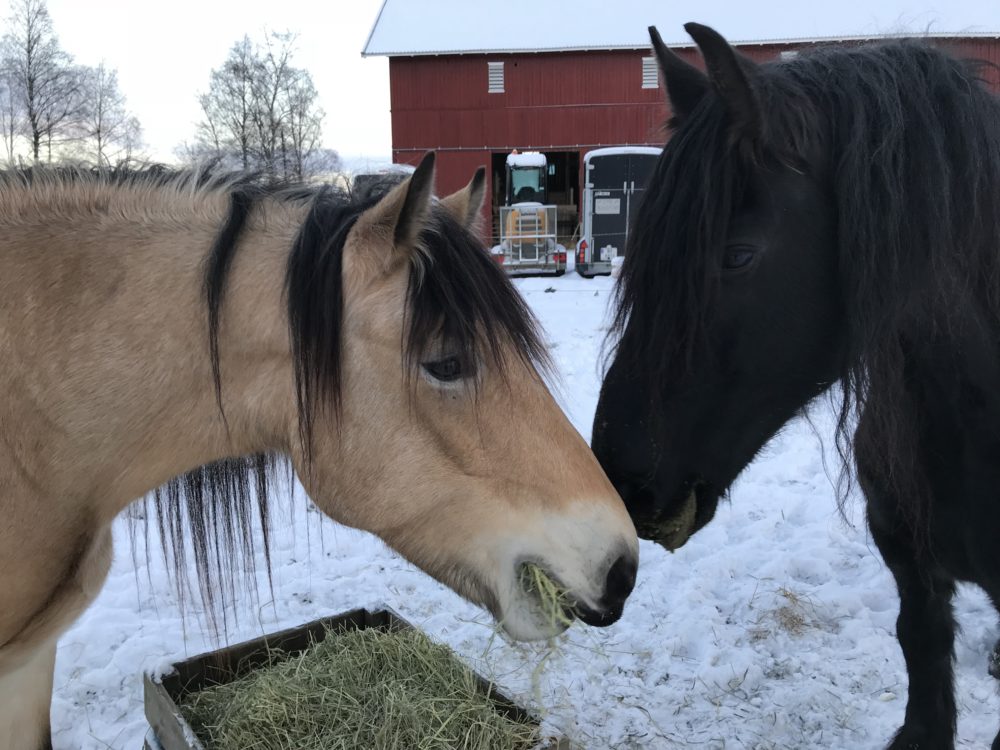 Photos from the secret weeks with Iver was last modified: January 17th, 2018 by Matilde Brandt