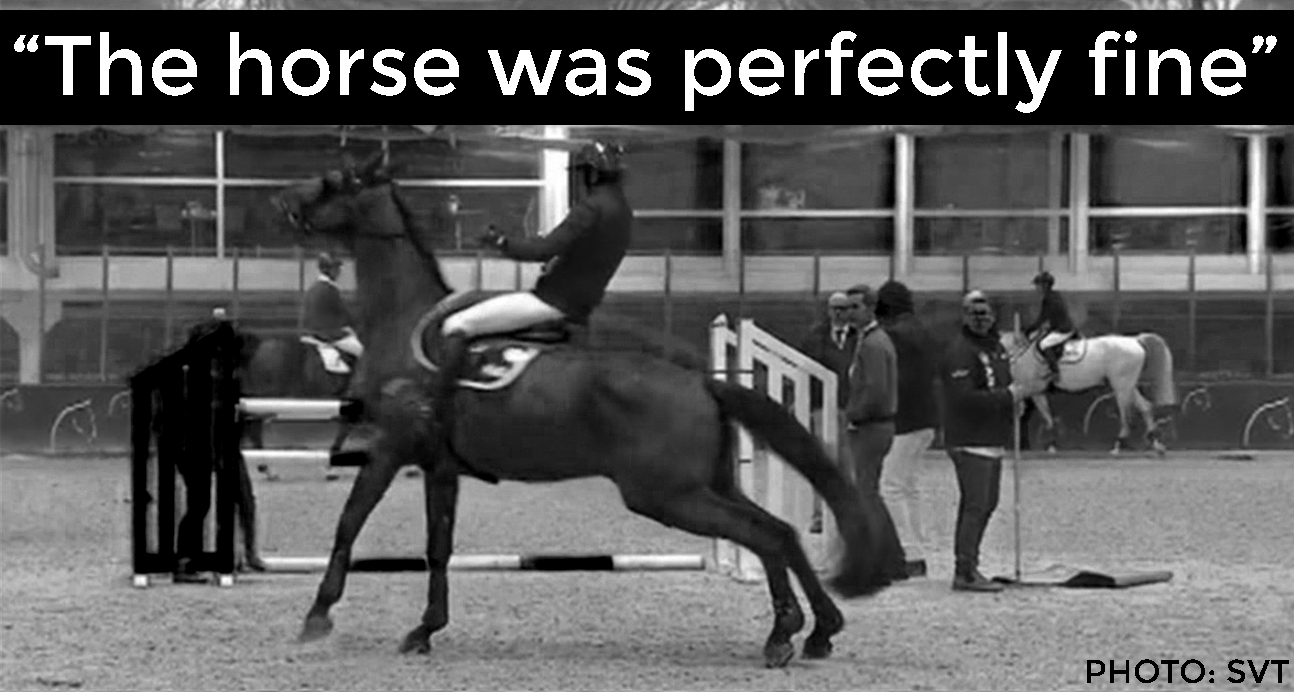 The FEI is finally speaking out about the incident in Gothenburg, where a horse was punished after he fell. The FEI wrote this on their Facebook page last evening:

«Thank you for your message. The FEI is looking into the full circumstances of the incident in which the French horse Vagabond de la Pomme stumbled very badly prior to the first round of Monday’s competition and the rider, Penelope Leprevost, reacted very roughly. The FEI Steward on duty in the warm-up reported the incident to the FEI and also to the FEI Chief Steward.

The French team vet also saw the horse stumbling, but felt that the horse was fine to go into the arena. Vagabond de la Pomme was clear in the first round, and was given a thorough check over in the stables afterwards by the French Team vet, who reported that the horse was perfectly fine.

Horse welfare is central to everything the FEI does, and is also a priority for both the Swedish National Federation and the organising committee of the Gothenburg Horse Show. The FEI’s Code of Conduct for the Welfare of the Horse is in place to ensure that horse welfare is protected at all FEI events.»

First of all – it is good that they are looking into the case. But even if the horse was fine from the veterinary’s perspective, the rider should not been allowed to compete, at all! The horse was definitely not “perfectly fine” treated, and riders using violence and punishment during the warmup, should in my opinion be banned from the competition. The horse experienced a large amount of pain when it was being kicked and pulled in the mouth multiple times, and even though she did not manage to do any visible damage, that kind of behavior towards animals is not acceptable in our sport. Both the Swedish Law on animal welfare forbids it, FEI’s own rules forbids it, and in a moral perspective, it is certainly not okay.

I hope the FEI, The Swedish International Federation and the organizers behind GHS will agree that this kind of behavior towards an innocent animal, is not, and will never be tolerated in our sport. The “Code of Conduct” is not worth anything if it can’t prevent a rider who abuses her horse on live TV to get away with it without any consequences.

Watch the video of the incident here (international)

Embarrassing for the equestrian world, extremely painful for the horse

Aim for your goals

What a disgrace to her sport. Nothing short of a year long suspension should follow this kind of behaviour. Smashing a raquet in tennis is bad enough, but at least the raquet does not feel the pain. Hateful woman

This is purely horrendous. The thing is FEI is a big association and in events like these there’s a lot of money involved and they don’t want to bring scandals out, so they close their eyes to situations like these, just like they do on dressage during the warming up with rolkur. There will always be unwillingness from officials to call to disqualification those that train and ride in a disgraceful way because they feel repercussions, money, social media, etc. Imagine what would happen if the rules were applied and she actually was forbidden to participate.
Technical delegates, vets, judges or officials are either unable or like I like to call UNWILLING to do their tasked job to further fair play and ethical methodology in spotting, correcting and penalize unwanted and unhealthy postures.

You are absolutely right, Matilde, that this should never be allowed! We need to be able to hold riders to a higher standard than just whether or not severe injury could be detected. Unless or until we can measure the actual pain the horse experiences, we have to err in favor of the horse. Sadly, in one incident where a rider was eliminated when blood was found, the head of the riders’ organization argued that there should be no eliminations because too much time and money is invested in these horses. These are not machines, but sentient beings, and money should never factor against their welfare!! Thanks for providing this update … I hope (though with little optimism) that the FEI will do the right thing.

What a disgrace. Poor horse having to be ridden by a rough temper tantrum individual. Ban her.

I’d like to knock the rider over and give her a few good kicks in the arse while she tries to get up, she should never have been allowed to complete, if she treats her horse like that in public what’s she doing in private??? BAN HER!!!