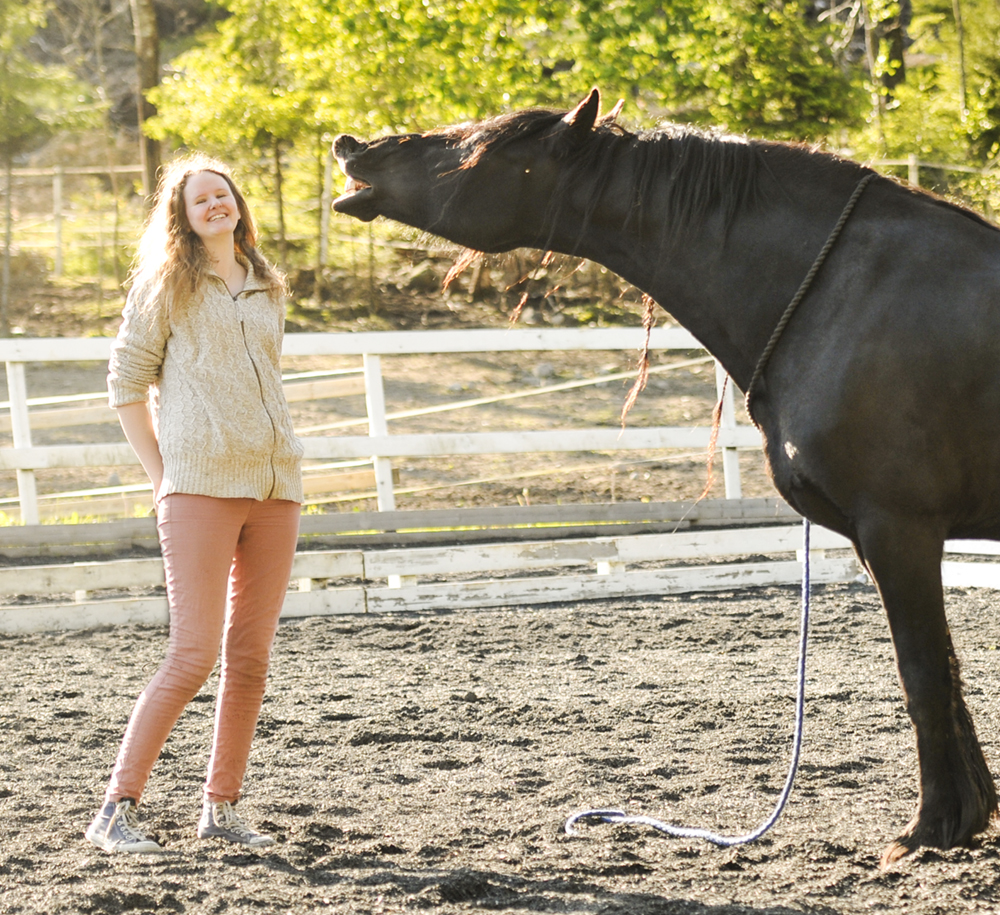 Batman knows quite a few tricks right now, some better than others, and I think some of the cues I use are a bit odd, but they just turned out as they did and I have no need for changing them, haha. Most of the cues are therefore coincidences, noises I made, a certain thing I did when I first praised him for doing it .. So yeah, why not write a little about them all?

Kiss
Kissing-noise! Sometimes I must assure him that’s what I’m asking for before he does the trick by pointing at the target (safety).

Smile
A little work in progress, but he will smile for a vocal cue. I make the noise “ummmmmm”. So random!

Jambette
Point on the leg I want him to lift with the whip, or touch him on his shoulder with a finger and say “jambette”. He will also do this trick when I’m lifting my own foot. While mounted, I simply place my leg in front of the girth.

Spanish walk
A little work in progress, but holding the whip in front of his front legs, and he will lift the right leg first, and then the left.

Turn butt towards me
Lift the whip over his hip or lift my arm and point at the hip. Sometimes I must assure him about what I’m asking about and praise a lot for a single step towards me. He won’t move his bum right at me without a clear signal (safety).

Hold the whip
Work in progress, he can only hold it in his mouth and pick it up from a barrel or something right now. I’m usually showing him the whip and say “pick up the whip” with a bright voice.

Lie down from the ground
When he is in lying down-mode, I’m simply looking on the ground and he will be down in seconds. Not lying down mode at all: I’m bending over and looking at the ground, making the same noises Batman is making when he is rolling. Lie down while mounted
Release the reins and drop them on his neck, take my feet out of the stirrups, relax in my legs and let them hang down, inhale deeeply multiple times and sometimes, and sometimes make “Batman is rolling”-noises.

Rear from the ground
When he is very ready for it mentally, I simply use my body language to ask him to rear, or point on his bum with the whip.

Rear while mounted
Lean back slightly, tighten the reins a bit, give a vocal cue, and then get a small rear. After that, I can ask him to rear higher. 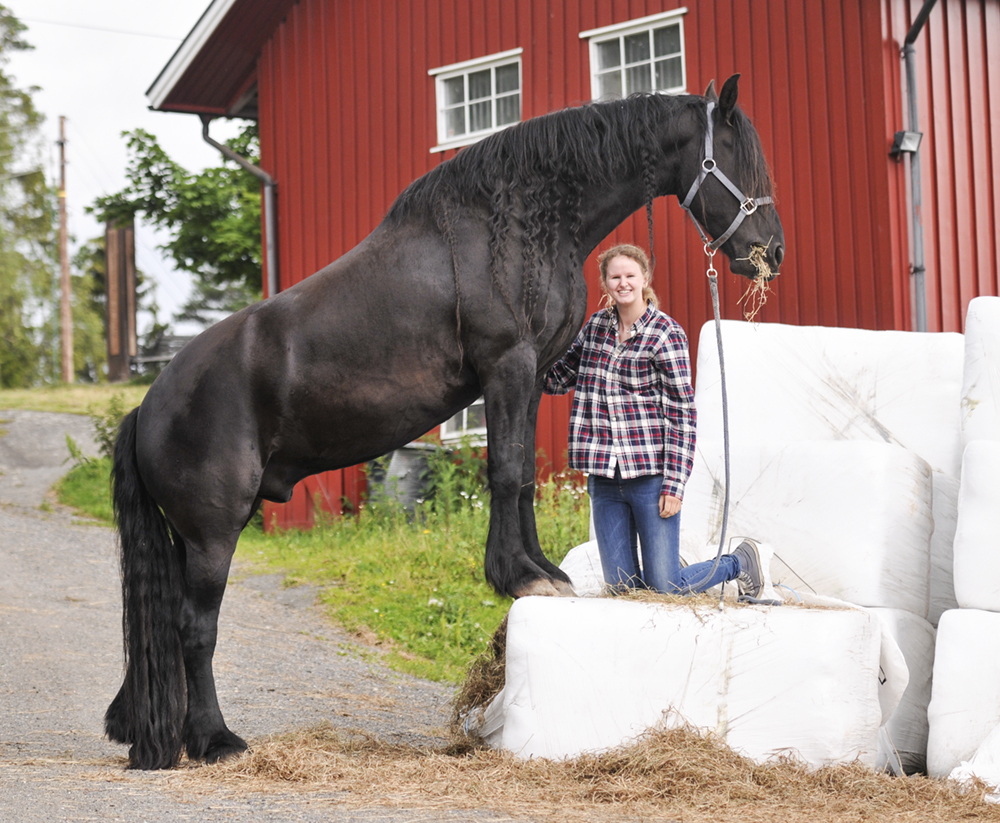 Park
Let go of the rope, look him into the eyes, say “staaay”, and walk quickly away.

Stand on object
Lead him towards the object, point on a front leg, and he will place the first leg on the object. Praise and ask for more, and he will climb up with both front legs.

Pee on cue
Only when he must pee, of course. Release the reins and make an “ssss” sound. Very practical!

Back up
Touch his breast with a light hand, and say “back”. 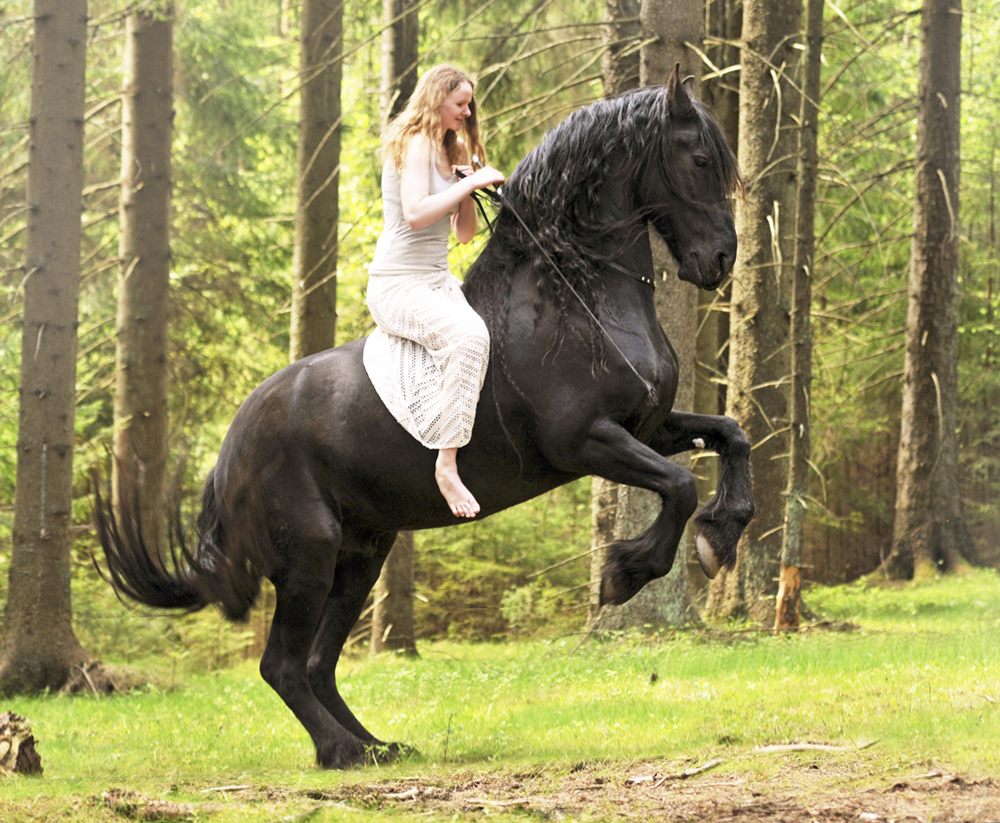 Does your horse know any tricks?

When life gives you lemons & lameness

Hehe, Bat is so careful! my mare only know more practical tricks, like lining up with whatever I’m standing on for mounting, keeping her head up when I’m fastening blankets in front, walking into her own stall on cue, giving me space when I bring in hay, and the best of all, pulling in her chest when I’m to tighten the girth. ;D

Jambette, smile and back up without touching :) But I really want to learn him how to lay down! But it’s really difficult because my horse don’t roll much in winter. And I want to learn him kiss but he is a weirdo who lick everyting so that is going to be fun :’)

Star: Learning the Spanish walk , smile on command by saying smile and raising one finger, hug me by standing close to his shoulder and tapping his shoulder, learning the bow, learning to paw on command, and also when he’s about to pee in the stable tie up I say wait and put a bucket under him and he aims in the bucket.
Coco: she’s only learning everything. But we do liberty and free lunging and free jumping.

He can do the Spanish walk (on and off), the paw, almost bow on cue, “chase me,” liberty circles at the walk (sometimes trot), working on lay but long process, hug, smile (on and off), kiss, “turn in cross ties” where I point at the cross ties and he turns to face me, kinda can back up on cue (when I am feet behind him)…. Working on more :)

He can do the Spanish walk (on and off), the paw, almost bow on cue, “chase me,” liberty circles at the walk (sometimes trot), working on lay but long process, hug, smile (on and off), kiss, “turn in cross ties” where I point at the cross ties and he turns to face me, kinda can back up on cue (when I am feet behind him), tackless riding…. Working on more :)

My mare can “smile” and rear on cue. For rearing I just say “up up”. She is starting to learn how to bow. My kidney stallion can rear on cue and hold things for me. I just put an object in front of his mouth and he will just stand there and hold it haha! He will follow me while holding things too. It’s very handy when I don’t feel like carrying a saddle bag ;) and he’s working on bowing.