35 things you did not know about Batman 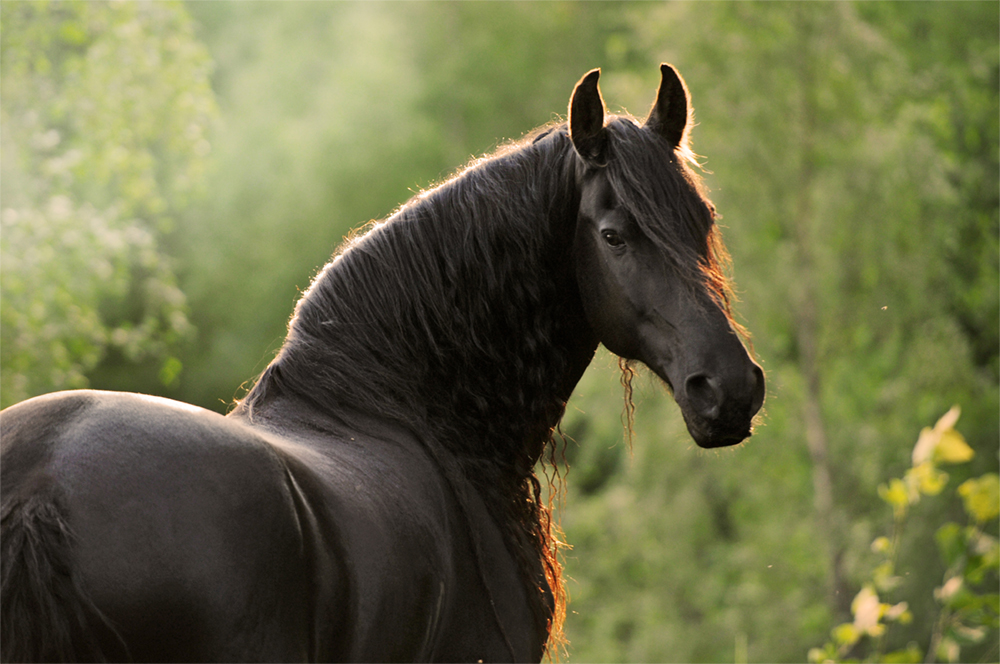 Who doesn’t want to get to know the coolest horse on the earth a little bit better? Here are 35 facts you might not know about Batman from before.

1. He is a right brain introvert, and was very hard for me to understand at first. If he ever becomes uncomfortable, he’ll disappear into his shell and stay there.

3. He is extremely care-taking and protective and knows very well if I’m not feeling well. 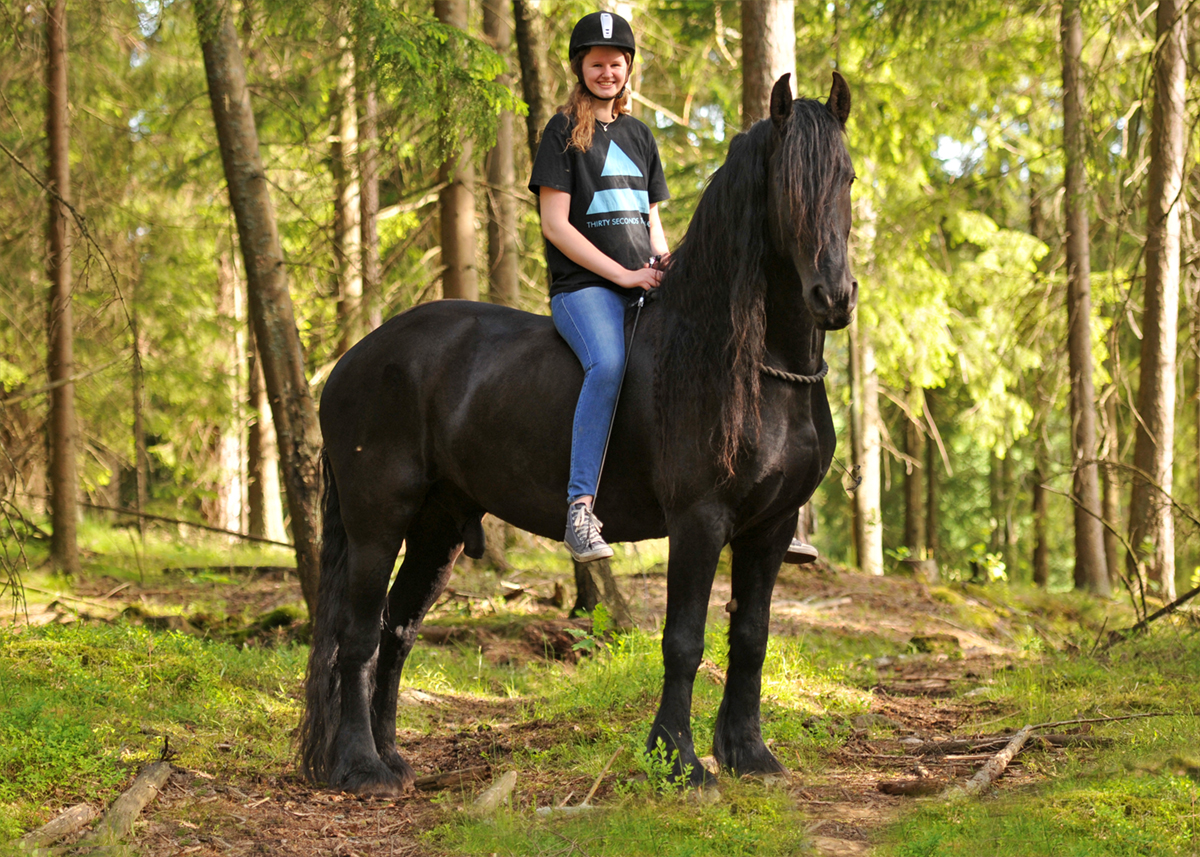 5. He needs lots and lots of praise, it can never be enough. He need a confirmation when he does something correct and feel much more confident and proud with praise.

7. He was born in Friesland, the Netherlands and his mother is a gorgeous named Frieda Wij. His father is Rintse 386. 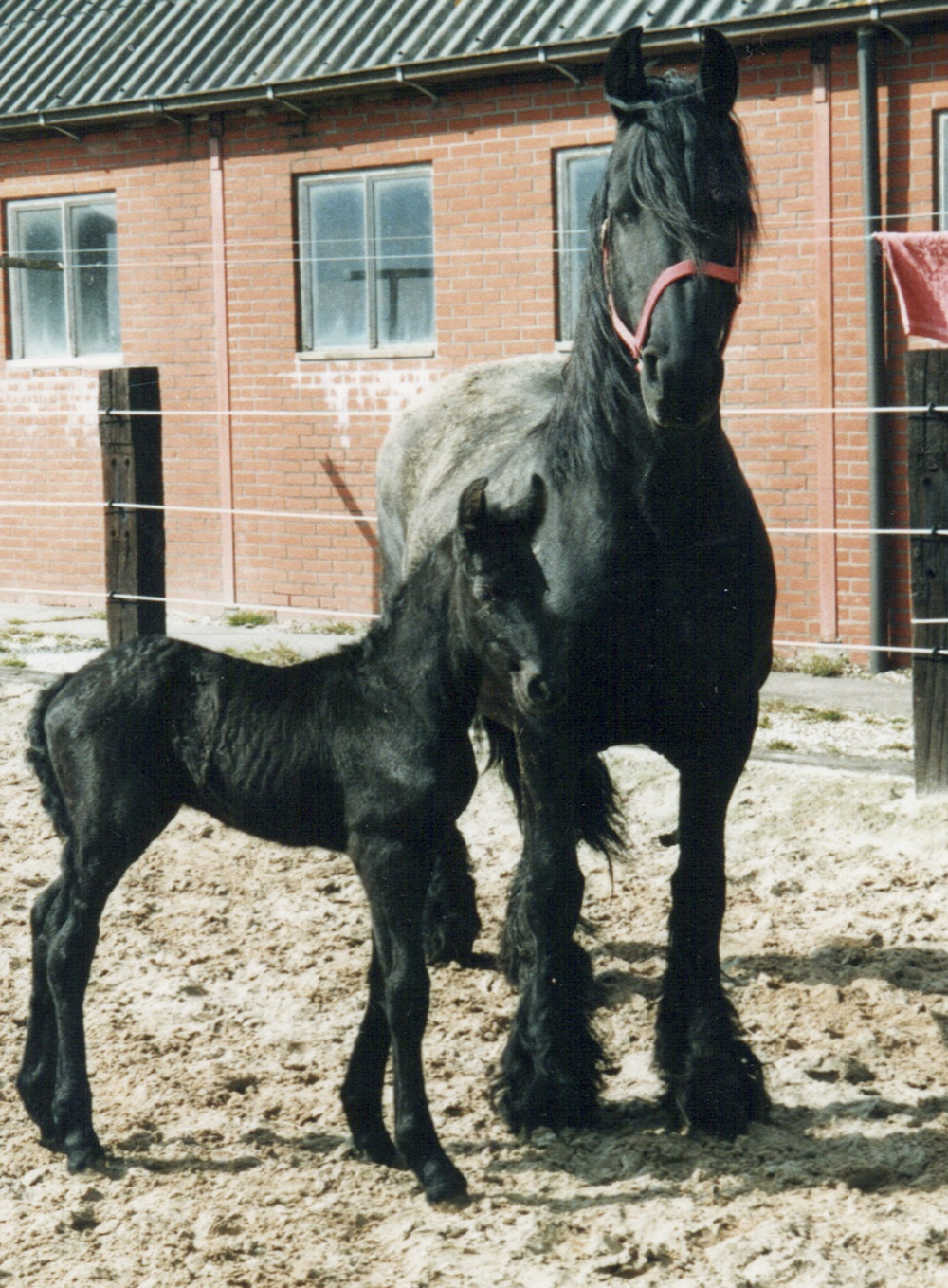 8. He is high alert and always paying attention to the environment!

9. If he sees something spooky, he will freeze. I can cover his eyes, play with his ears and everything but he will not move a muscle! Like a living statue; quite creepy sometimes.

10. Canter used to be his weakest gait, but is now his strongest. His collected canter has become brilliant after I started liberty training. 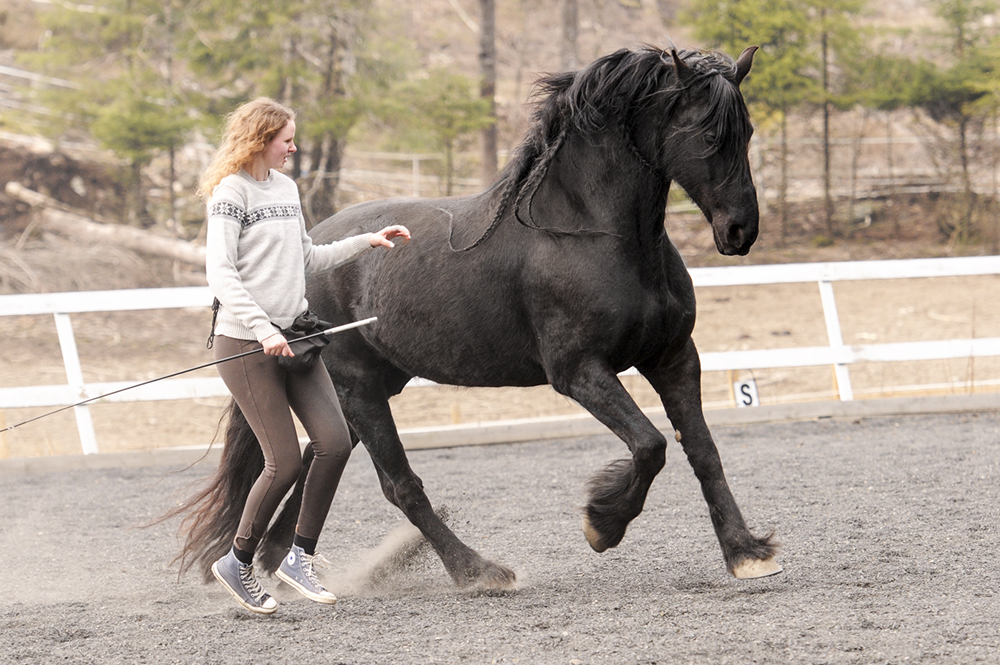 11. He is heavy built for a Friesian with a longer back and lots of “push” in his movements, but he love showing off and always move with good collection and pride when we are playing.

12. He loves to pull his carriage, and is at his proudest when we are driving.

13. He is actually not very brave, but together we mostly manage. “Canter? Here? But, Matilde, it might be a dinosaur around the next turn!”

14. His movements are huge, I got seasick the first time I rode him. He is like riding a big boat!

15. He has never been shod, barefoot all his life, and I prefer it that way.

16. He is a very good trail horse and can easily trot through very rough terrain. He is very steady footed. 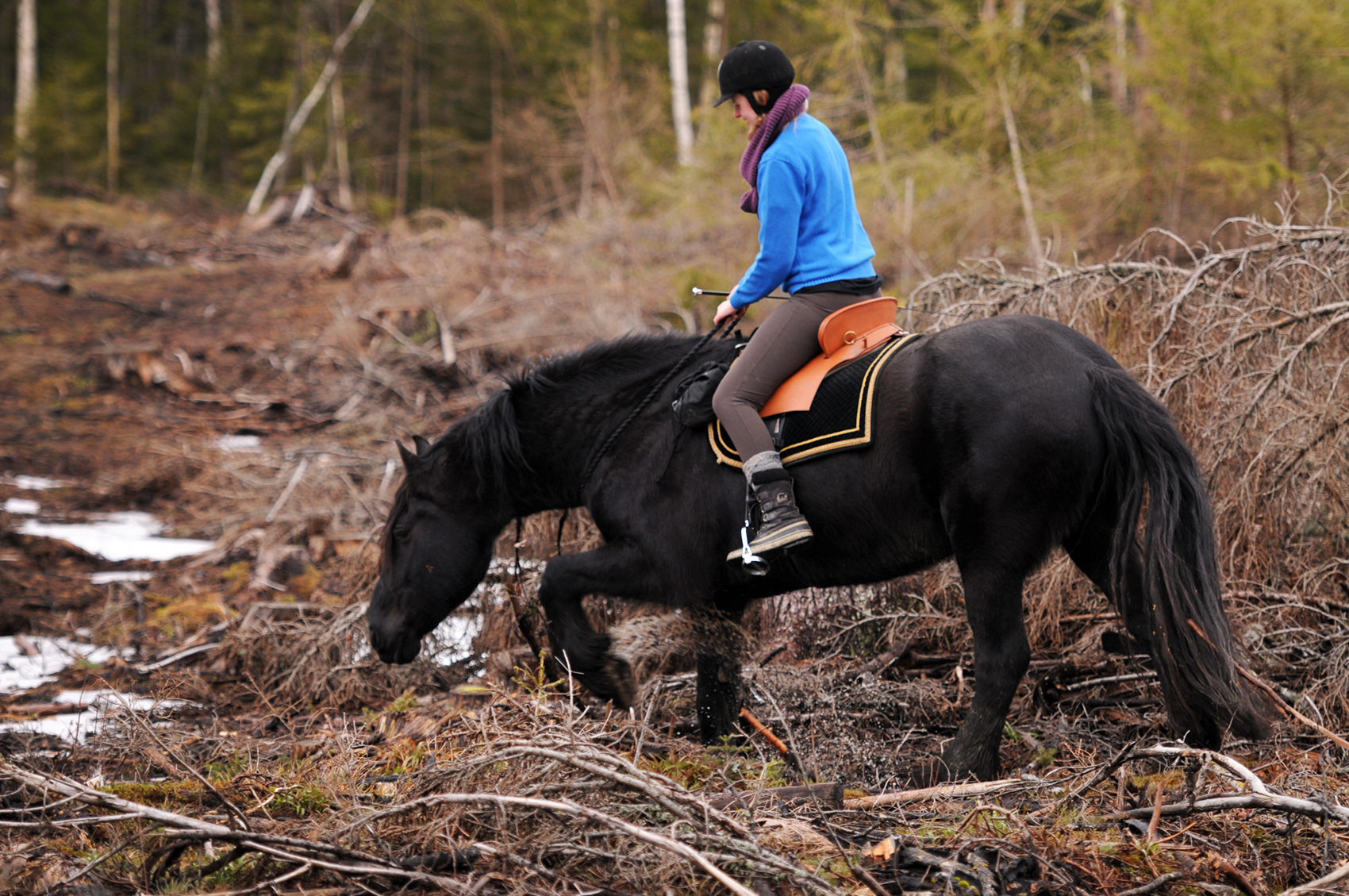 17. He loves dogs! When Batman see a dog, he will walk straight towards the dog and say hello.

18. After 6 years on turnout 24/7, he has grown to hate being in a box or paddock. I tried to have him stalled for a month once because he had stomach problems, but he literally became crazy. We had to put him back in his heard again. Sorry for that, Batman.. He can spend a weekend in a box, but not longer than that.

19. He attach very much to his closest humans and horses.

20. He is very kind and patient, and can be ridden by everybody, as long as I am near.

21. He is well educated and can be ridden with very small cues trough the seat. He is extremely sensitive, and will go from canter to halt in a second if you change your position by accident. 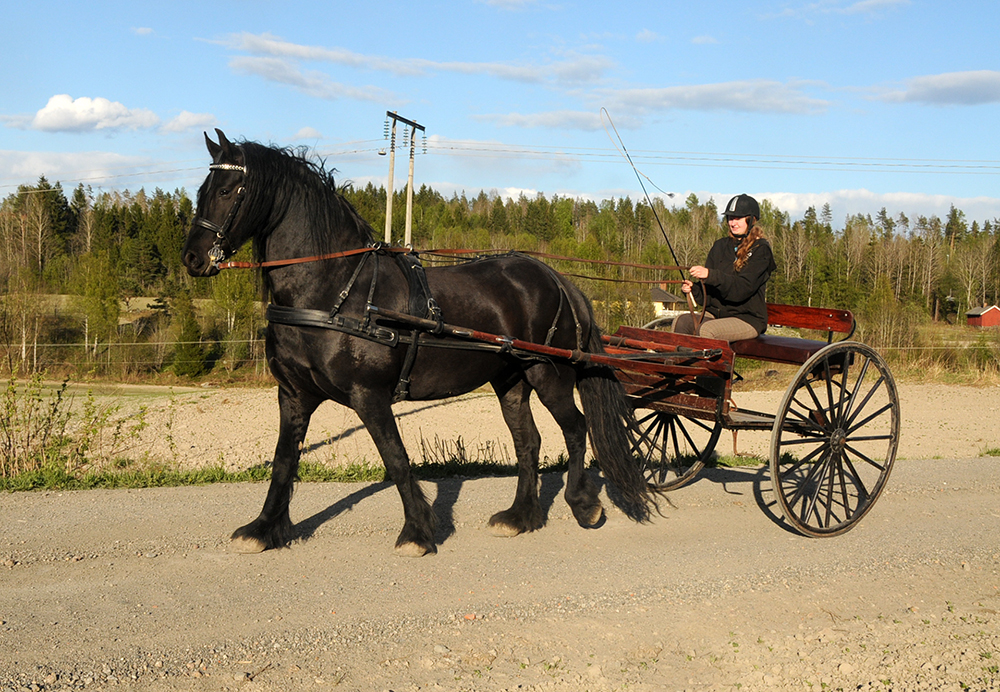 22. He prefers to be trained or ridden without bridles or halters.

23. His mane is over 1 meter long (and still growing rapidly), so I must have it braided. It is impossible to ride him without braids, as the mane flows into my face and fastens under the saddle and my legs.

24. He is a purebred KFPS Friesian.

26. If he became very stressed or scared, he is hard to handle because you have to calm him down and keep him in place at the same time. That’s a challenge with a highly sensitive horse on the size of an elephant!

27. He enjoys jumping, and becomes very eager towards the fence. His technique is pretty good as well. 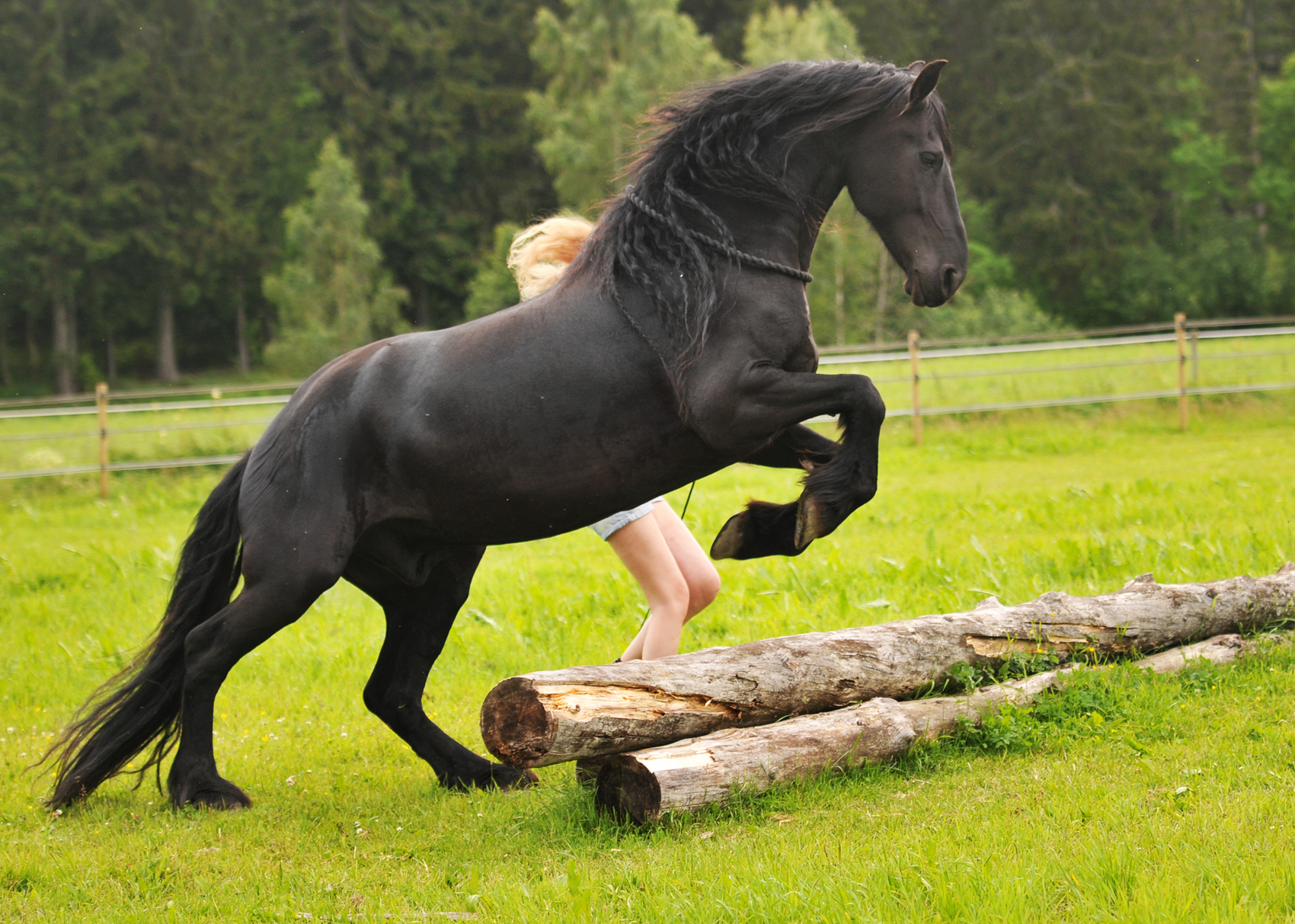 28. He hate snaffle bits, if I use a bit on him, I prefer a curb bit. He can’t handle the feeling of the bit moving back in the mouth from pressure of the reins on the tongue and bars. He is soooo much more relaxed on a curb with looser reins.

29. He can simply not be trained with violence. If he feel insecure, he will run, no matter how many men holding the rope.

30. He had a career as an actor! He was the king’s horse in an outdoor theatre. It was a challenge because we had very short time to prepare the horses, but in the end, I’m really proud of his performance! He carried the Norwegian actor Hermann Sabado trough the battlefield, with people lying on the ground, and Batman had to walk carefully trough the smoke with 300 people, including the Crown Prince of Norway watching him! 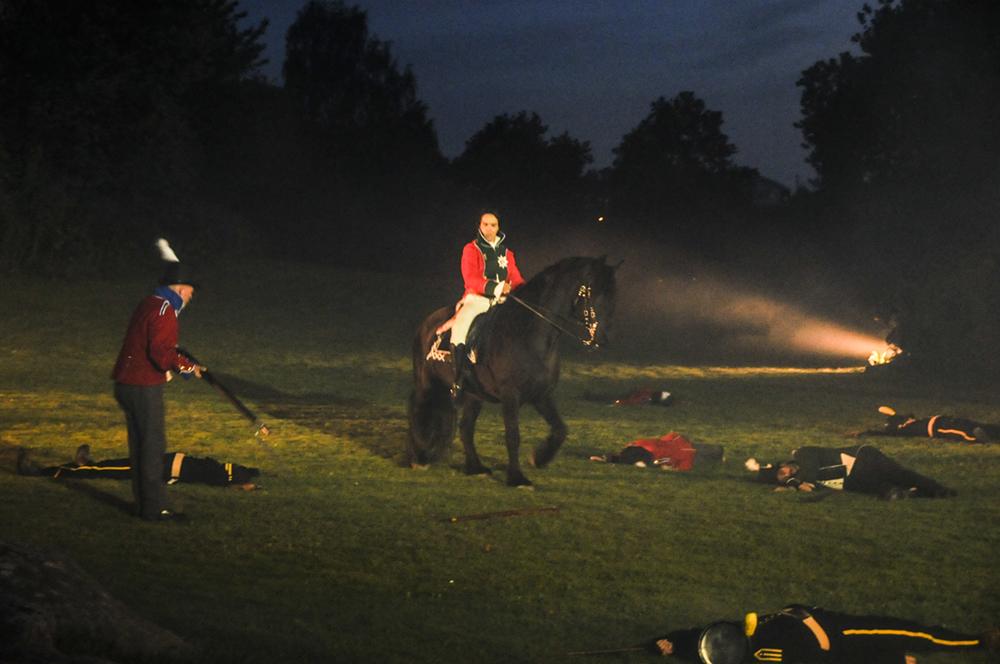 31. He can be bored on hacks at home, and prefer when we travel to other places to ride there instead.

32. We have won many ribbons together, and competed in dressage, jumping, shows and endurance.

33. You must earn Batman’s attention, if you don’t, he simply won’t care about you.

34. His personality is sweet, loving, funny, calm, but sensitive, patient, proud and careful. 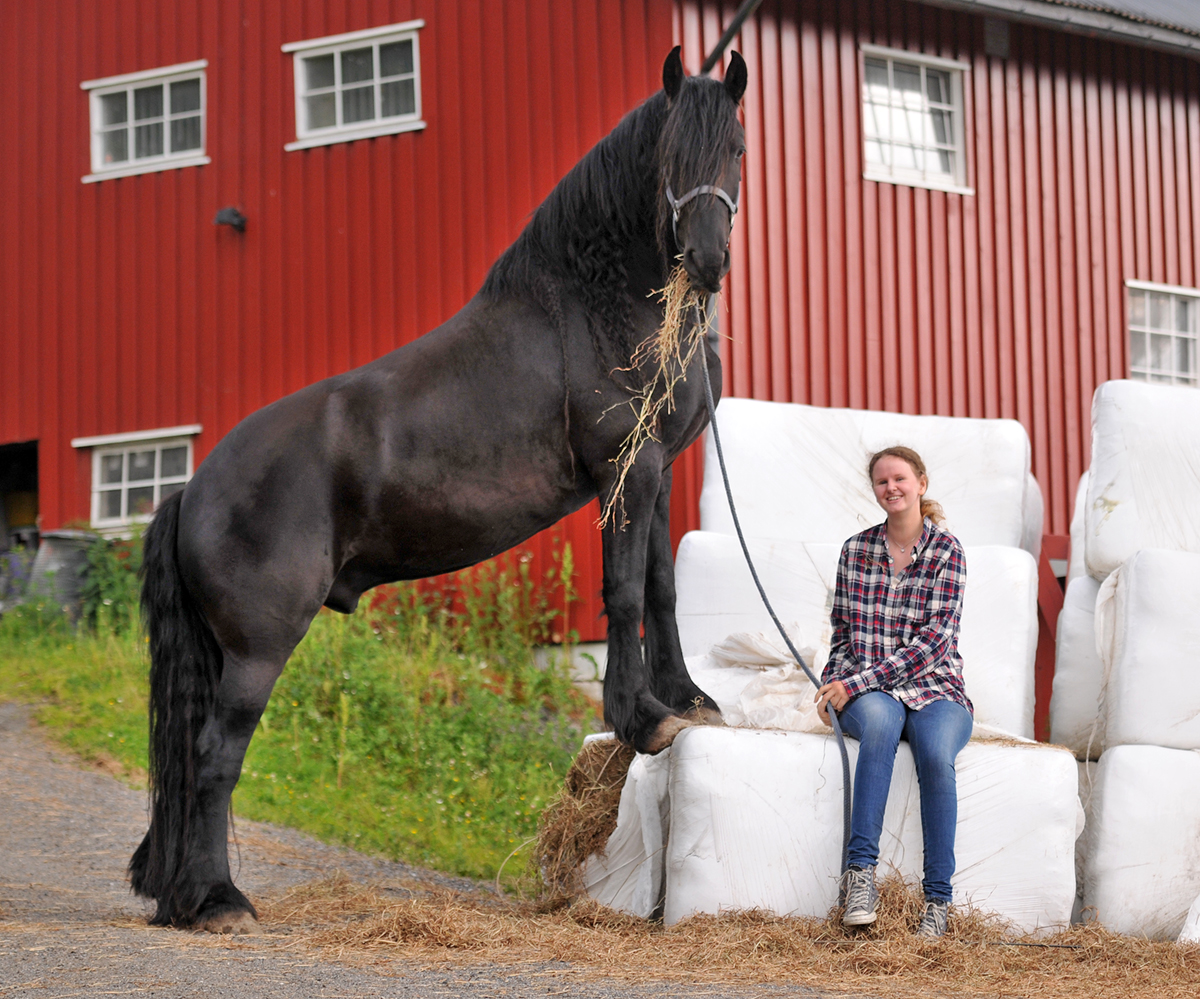 Did you know anything on the list from before? If so, you are a true Batman-fan!

35 things you did not know about Batman was last modified: January 2nd, 2017 by Matilde Brandt

Batman in the blizzard

That was a lovely read!! But why the name Batman then? :D

I have never read about the different horsenalities! But wow, so accurate, and interesting! I could place so many horses in different categories. Prins is definately a left-brain introvert, sometimes I feel he’s just standing there laughing “haha, nice try! don’t care”. Haha!

That Batman was a right-brain introvert was the only thing I didn’t know from before, but based on how you have described him sinced you got him I recognized his personality while reading about it :) I am here now a self-declared Batman & Matilde fan!

I knew 24 of the 35 facts so I think I’m a Batman & Mathilde fan officially !
This post is really funny and interesting to read. :)
Do you always use a bit while driving with him ?

I didn’t realize how tall both of you guys are! I am 165cm tall so I’d be shorter than Batman’s withers! You guys make a great team! -@thathorseoakley

28. He hate snaffle bits, if I use a bit on him, I prefer a curb bit. He can’t handle the feeling of the bit moving back in the mouth from pressure of the reins on the tongue and bars. He is soooo much more relaxed on a curb with looser reins.
*****
I understand this and for most of my BHS life as an Instructor, horses had snaffle bits. Now, upon my return to dressage [40 years later], I have found a better way which is called French Classical Dressage and riding in ‘lightness’. I’m a student once again! Basically, Matilde, the bit does not pressure the tongue but one actually has a conversation with the horses mouth .. to be exact, on the corners of their lips. To halt, one raises the reins… never any pulling or pressure on the tongue. It is an ART to learn correctly and you might be interested in reading more http://www.phillipekarl.com Happy New Year!! [loved your blog]

Wow thats so cool!! I never knew Batman was…. Was …was that amazing!!! I mean I knew that he is an awesome horse but WOW!! I was also wondering how old is Batman?

I love batman he is so handsome and charming!

Yaass I am a true Batman fan ;p haha but didn’t know all of these facts so still loved to read the 35 facts about Batman. It’s so cool Batman played in such a huge performance! :D

Hi, yup this paragraph is actually pleasant and I have learned lot of things from it
regarding blogging. thanks.

Wow! This was an really interesting blogpost! :D I really got suprised a few times, because I always thought he was sort of exactly like Caja. But he is not, and in the same time he is hahah.
I got surprised of him being leader of the herd, and that he comes from the Netherlands (though I did see it at instagram earlier). And Caja has problems with canter too, and that’s why I mostly am doing straightness training with her right now also like Batman she also is extremely sensitive. And earlier today I was wondering what his “real name” is, now I read it here :P

If you have wondered what branding is and how it works, use this example.
In biochemistry there are two pathways that will initiate the complement molecules
for them to start the complement pathway. What does cftu mean

Sometimes such corporate awards have proven to be a good motivator at work.
Doing so will give you the best chances at staying sober in the
long run.

For more information about what that New Age lifestyle is, keep reading the rest of this list.
There are those who feel that reciting the Pledge is a way to show loyalty to the country.
What does mean mean in math

If you can avoid emotional relapse then the idea of picking up a drink or
a drug in the physical sense becomes less of a threat.
In his admonition, he metaphorically describes this hypocrisy as
leaven by saying “Your glorying is not good.