We experienced the ultimate nightmare. What an evening this was .. Tuesday afternoon we were headed to my vet for a checkup on Batman’s teeth, and my friend’s horse was also with us on the trailer. Halfway there a semitrailer suddenly appeared to the right for the car driving in front of us, and the car stopped very fast. We had to break as well, it was not ideal but we have experienced much worse. But then we heard slamming and noises from the trailer, and my heart skipped a beat and adrenaline flew through my veins. We drove 200 meters to a place where we could stop, and I jumped out even before the car stood still.. I ran to the trailer to check on the horses, terrified, and found Batman, lying on the floor with his head stuck over the breast bar. It pushed really hard on his throat and he was struggling to breathe. My panic was gone the moment I saw him and I went into “keep calm and solve this fucking problem”-mode. At one point I was actually afraid he would suffocate. The noises from his nose said it all!

Thank god my best friends were with me on the trip, and we was three people to handle the situation! Stuck on the main road in the darkness in an emergency situation, with lots of traffic, that’s every equestrian’s ultimate nightmare.

Batman was in distress, but he reimaned calm. I tried to get him up two times without luck; he struggled so hard and had no chance. When he tried to get up, the entire trailer started to shake drastically and it was dangerous to stay inside. We had to find another way.

We decided to get my friends horse out in order to remove the wall between them, and we was seriously blocking half the main road with loads of traffic, in the darkness, and now we had to get both the two huge horses out, one of them lying stuck in the trailer and we had no idea about he would react when he got out.

We got the other horse out and managed to remove the wall while Batman’s head was held up so he could breathe better. I went back to check on his hind legs, and he was very calm about me walking around behind him. His hind leg was in a difficult position, but we had to get him up now. I went forward again, he waitet patiently, and I gave him the signal to get up. It made a hell of a lot of noise, but FINALLY Batman managed to get up and out!

So then we stood there on the main road with huge semitrailers driving past only two meters from our horses, lots of noise from a construction area nearby and two huge horses. They stood both perfectly still in the chaos, it was incredible to watch. We checked the trailer and decided to get them both back on. That was basically the only thing we could do! With cars and trailers and traffic and chaos passing by, they both walked back in. The other horse first, and then Batman. It took him two minutes, but I just loaded him as I always do, and thank God, it worked. After Batman’s traumatic accident it was amazing to see how much he trusted us.

The other cars did not show any respect at all, and lucky for them, our horses are extremely well trained. One horse on the loose in the highway in the darkness is the perfect recipe for an serious accident. And Batman and I used to have problems with trailer loading before, if he became a little unsecure, he chose to ran away and I had no chance of holding him back. I am so extremely glad I have put so much time and effort into basis training the last years.

Every moment I spend playing around with Batman from the ground, building our relationship based on trust, I prepare for an emergency situation like this one. I don’t dare thinking about how this could have ended if he was not as well trained as he is.

Batman is used to me handling him when he is lying down, he is used to trust me when something scary appears and he know that humans are there to help. Therefore, he did not panic, he remained calm, and he waited for us to solve the problem. If a horse on Batman’s size had panicked inside the trailer, he walls would eventually give after and that would be a way more dangerous and much more serious situation.

In the end, remember to never put the basis training second. Take your time, it’s the smartest thing you can do. Working with your horse from the ground is not wasted time, it is the opposite. With a good foundation, you are so much better prepared if you will ever experience a situation like we did this night.

Batman was checked at the veterinary’s and he had no serious injuries. He will rest for a couple of days, and hopefully be back in business soon! 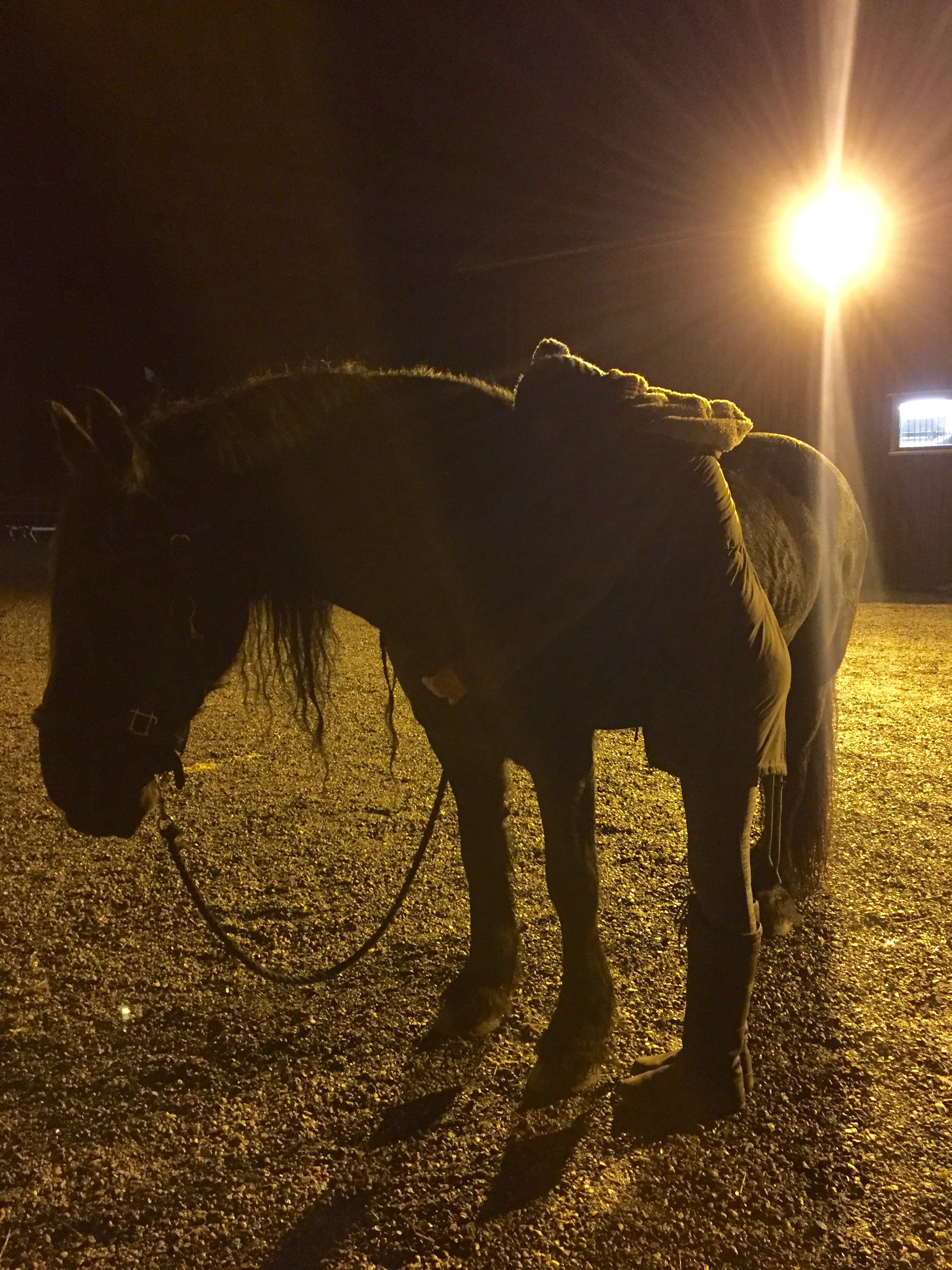 Good basis training can make a huge difference in an emergency situation was last modified: January 7th, 2016 by Matilde Brandt

Stop breaking your horse down, build him up instead: A change of thinking

That’s literally my nightmare, I hate taking the horses places simply because people are so completely disrespectful in traffic, when I went to get Salsa a busdriver (!) honked (!!) because I took a turn slower than he apparently thought was necessary… like that’s gonna move things along, scaring the crap out of the horse…

I’ve been driving horses regularly for 12 years and have never had an accident but tons of minor incidents due to other drivers. I don’t think anything is as nervracking for me.

Oh my god ! I’m so happy that you are both ok ! That’s horrible. But you must be proud of Batman and you, you are awesome !